At the launch of the Xiaomi Mi 10 series, Xiaomi also released its first router that supports Wi-Fi 6, the Xiaomi AIoT router AX3600. The price of 599 yuan is very cheap among the currently available Wi-Fi 6 products.

According to the official statement, the Xiaomi AIoT router AX3600 has a three-gigabit wireless speed, adopts a Qualcomm six-core processor (quad-core CPU + dual-core NPU) and 6 external signal amplifiers, and also has an independent AIoT smart antenna to support Xiaomi smart One-click network configuration of the device.

In terms of antennas, the Xiaomi AIoT router AX3600 adopts an external 7-antenna design, including 1 IoT device antenna, 2 2.4GHz antennas, and 4 5GHz antennas to ensure wider signal coverage and further enhanced wall penetration performance. At the same time, it is equipped with 6 high-performance signal amplifiers: 2 and 4 external high-performance signal amplifiers (PA power amplifier + LNA low noise amplifier) ​​in the 2.4GHz band and 5GHz band respectively. The power amplifier can effectively enhance the signal transmission power, so that the signal transmitted by the router can transmit farther, and the low-noise amplifier can improve the signal receiving sensitivity, so that the router can receive weaker signals. 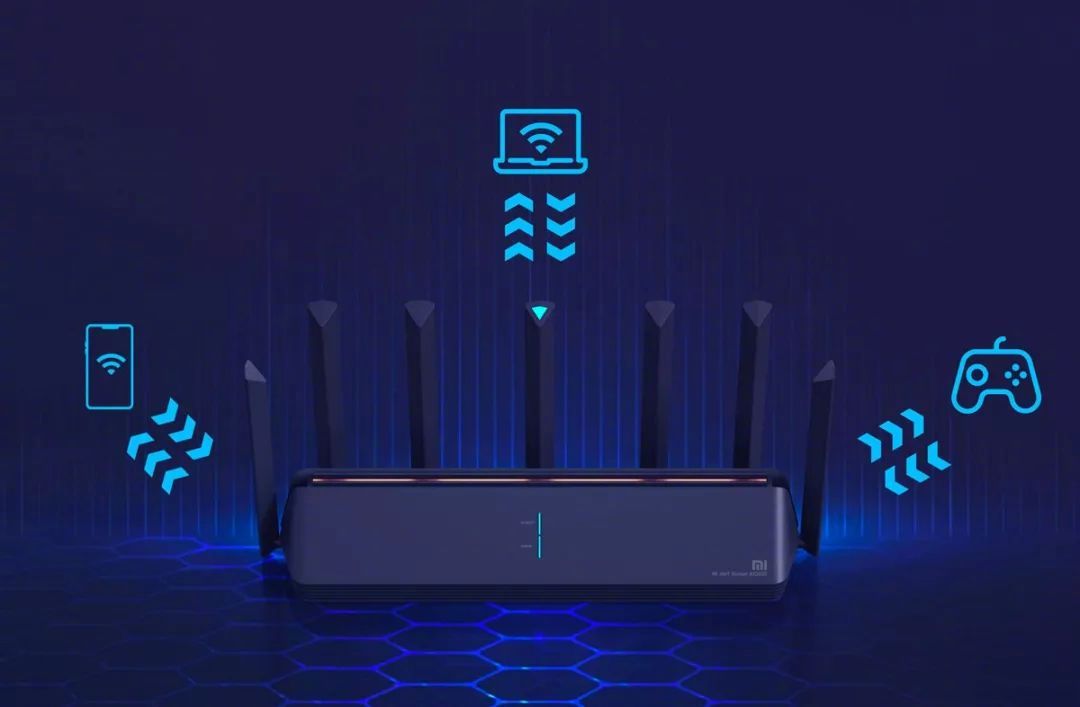 Wi-Fi 6, as the name suggests, is the sixth generation of Wi-Fi technology, a wireless network standard, the full name is IEEE 802.11ax, which is an upgraded version of IEEE 802.11ac (Wi-Fi 5).

The goal of the Wi-Fi 6 standard is to support indoor and outdoor scenarios, improve spectral efficiency, and increase 4 times the actual throughput in dense user environments.

To put it simply, a router that supports Wi-Fi 6 will still be backward compatible with existing protocols such as Wi-Fi 5. Even if a mobile phone does not support Wi-Fi 6, it can still be used in the Internet normally under the router.

So what exactly is Wi-Fi 6 good for?

The first is OFDMA frequency division multiplexing technology. The previous generation of Wi-Fi data transmission adopts the OFDM mode. Different users under the same Wi-Fi are distinguished by time. In each time period, a user will completely occupy all subcarriers and send complete data packets. This is why once there are too many connected devices, Wi-Fi will become stuck, because it can only serve one terminal at the same time, and the data transmission is not efficient enough, and the more users, the more serious the interference will be.

Wi-Fi 6 uses OFDMA frequency division multiplexing technology to solve this problem, subdividing the resources of Wi-Fi channels again and assigning them to each user, so in general, in each unit time, there may be more users send data at the same time. Because of the subdivision, the router can distribute the load according to the actual signal situation, the network is more efficient, and the QOS can also respond in a more timely manner.

Next is 1024-QAM. Wi-Fi 6 has a higher QAM level and more information in its signal. Wi-Fi 5 uses 256-QAM, and Wi-Fi 6 is directly 25% higher, which is reflected in the network speed. The theoretical maximum speed of a single 5G antenna is 433Mbps under Wi-Fi 5 and 433Mbps under Wi-Fi 6. Then rose to 600.5Mbps. This not only represents a higher network speed limit, but also means that in places with poor signals, the Wi-Fi 6 router can still provide a high rate of guaranteed use after the signal is attenuated.

The transmission principle of Wi-Fi radio frequency limits a channel to only allow a single user to transmit data at any given time. In Wi-Fi 5, in order to avoid conflicts, a query mechanism is adopted, that is, to check whether the channel is busy before transmission. This will waste a lot of time on the query, and the more devices there are, the more serious the network congestion will be (this is why part of the Wi-Fi optimization is the preferred channel).

A coloring mechanism was introduced in Wi-Fi 6, that is, each connected device is independently labeled and labeled. In this way, even if there are other devices in the channel, it will not be sent to other devices by mistake, and the query step is directly omitted. Combined with the characteristics of OFDMA shared channels, all channels under Wi-Fi 6 are connected to all devices. can maintain the most efficient operation.

Since Wi-Fi 6 adopts the Long OFDM symbol transmission mechanism, the duration of each data transmission is increased to 4 times the original, so the packet loss rate of the terminal is also significantly reduced. And because the minimum bandwidth of only 2MHz can be used for narrowband transportation, its coverage distance is also wider.

In addition to these five main advantages, Wi-Fi 6 also supports a wake-up time mechanism, which can wake up low-speed devices in an orderly manner and exchange data by generating a wake-up schedule with connected devices. This will greatly reduce the power consumption of these devices and avoid network congestion caused by waking up too many devices at the same time. In addition, Wi-Fi 6 also supports the more secure WPA 3 protocol, which is more difficult to crack.

In general, various technologies in the Wi-Fi 5 era are dedicated to improving the experience of a single terminal connecting to the network. On this basis, Wi-Fi 6 solves the problem of interference and efficiency when multiple devices are connected to a Wi-Fi network. It can connect more devices at the same time, but has a more efficient, stable and fast network experience. In the future, there will be more and more mobile devices using Wi-Fi in our homes. Various devices will seize network resources, and the network will “feign death” from time to time. In this case, Wi-Fi 6 is the best solution.

Simply put, Wi-Fi 6 is the future of Wi-Fi technology, and 2020 is the first year when Wi-Fi 6 began to become popular.


What does the Xiaomi AIoT router AX3600 look like?

The box can be said to be a big guy. When I took the express, I didn’t expect it to be a router. 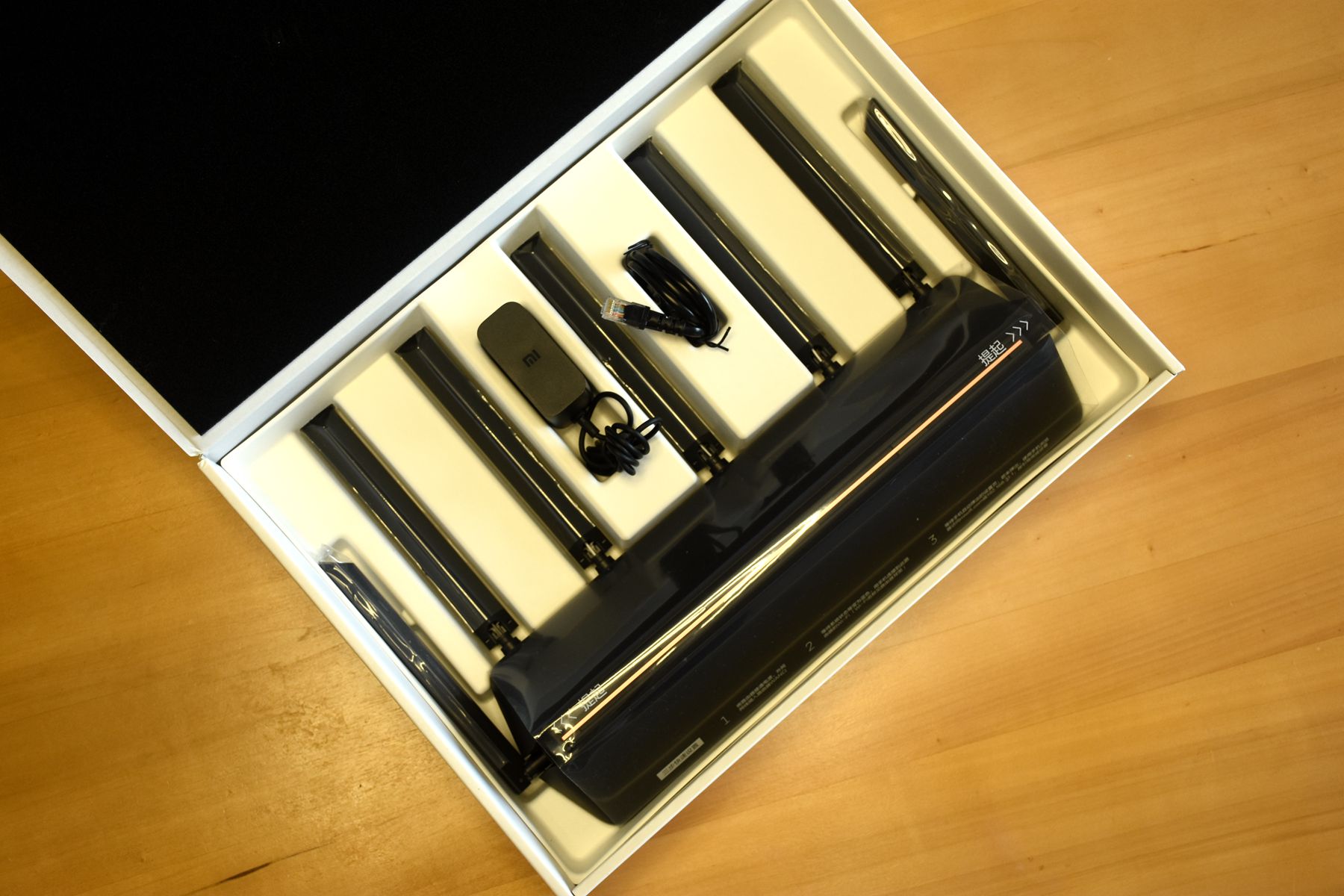 Inside the box, there is basically no wasted space, and the router itself is large enough. 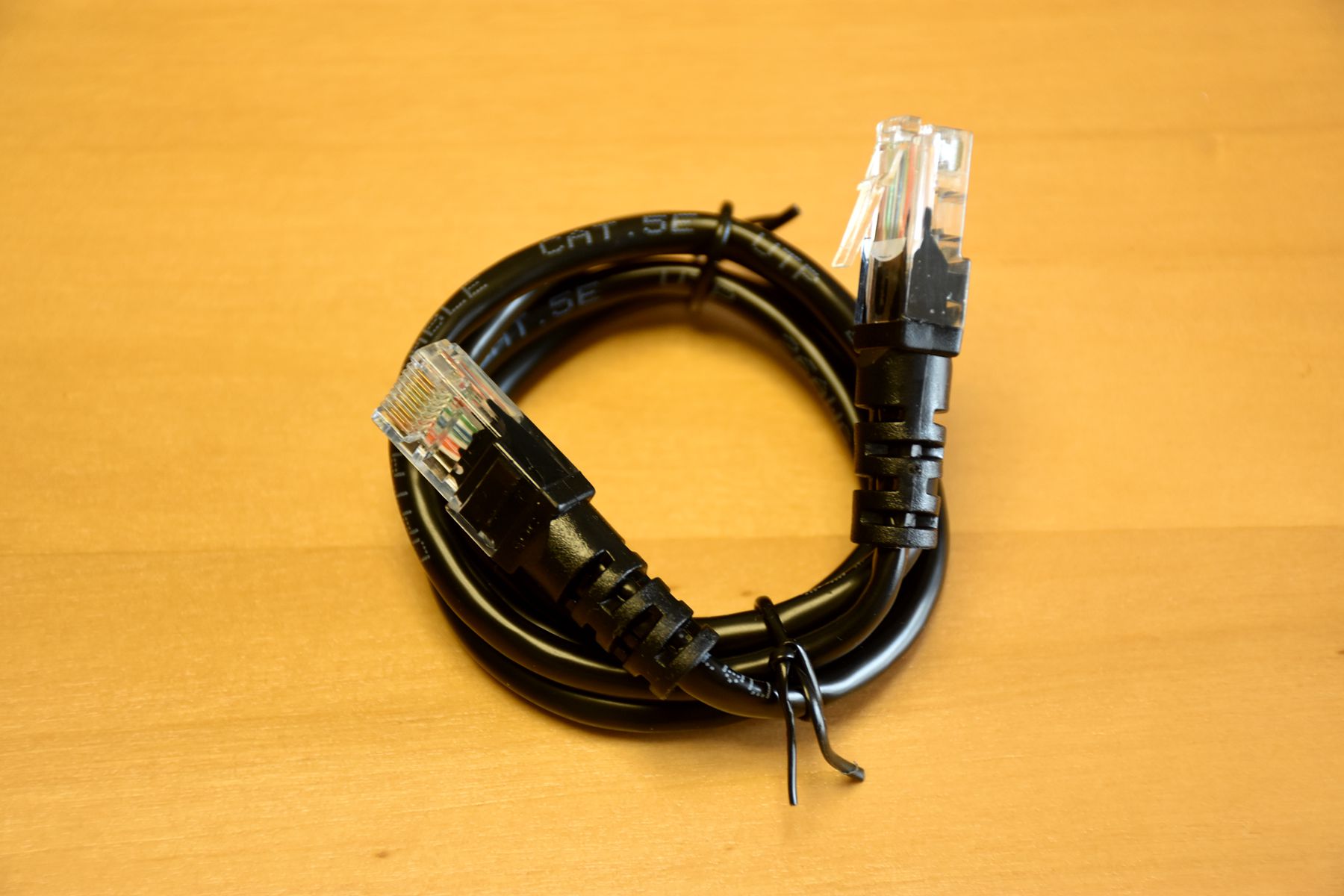 The box comes with a CAT.5E cable 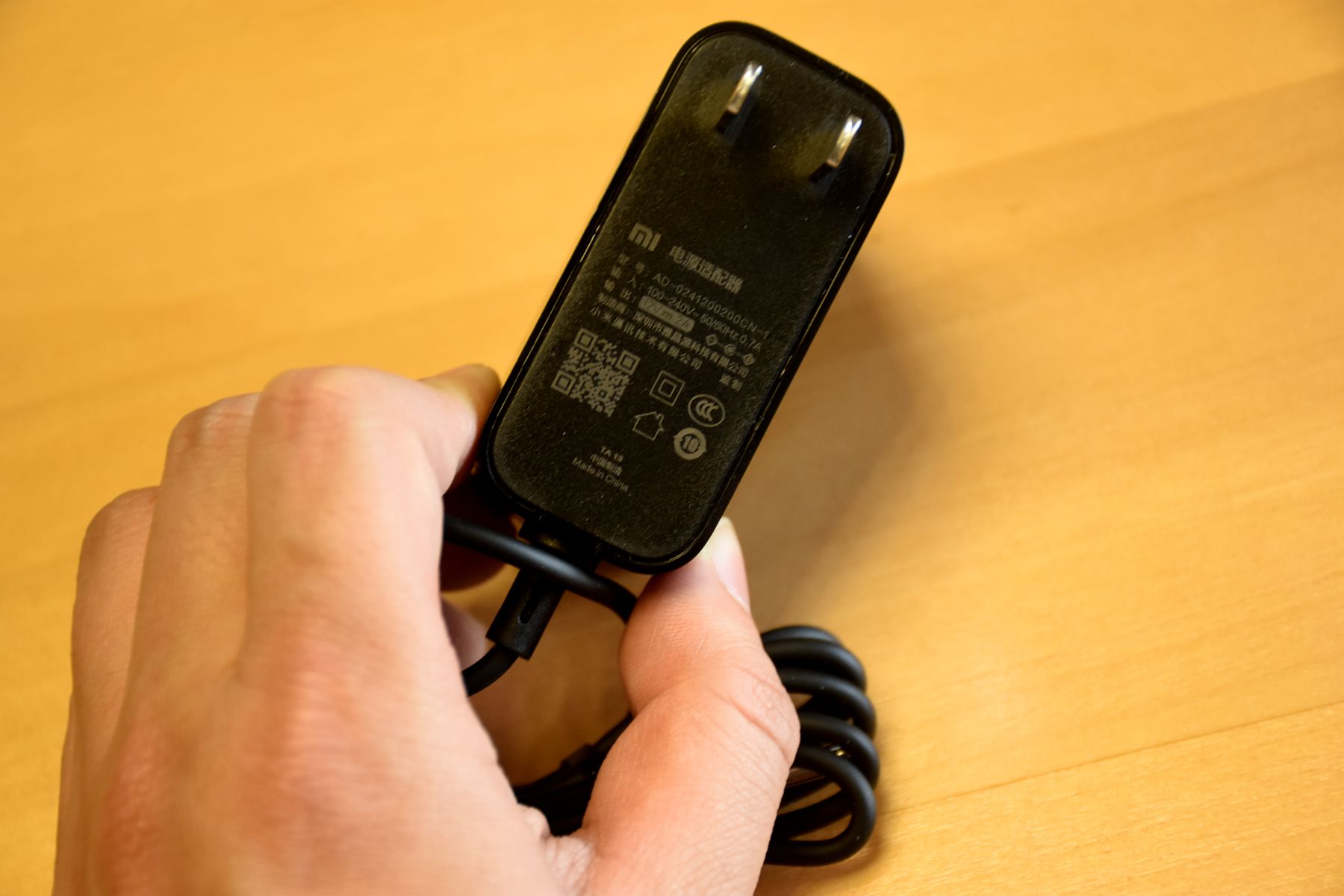 The power supply of the router is 12/2A, and the maximum power is 24W. 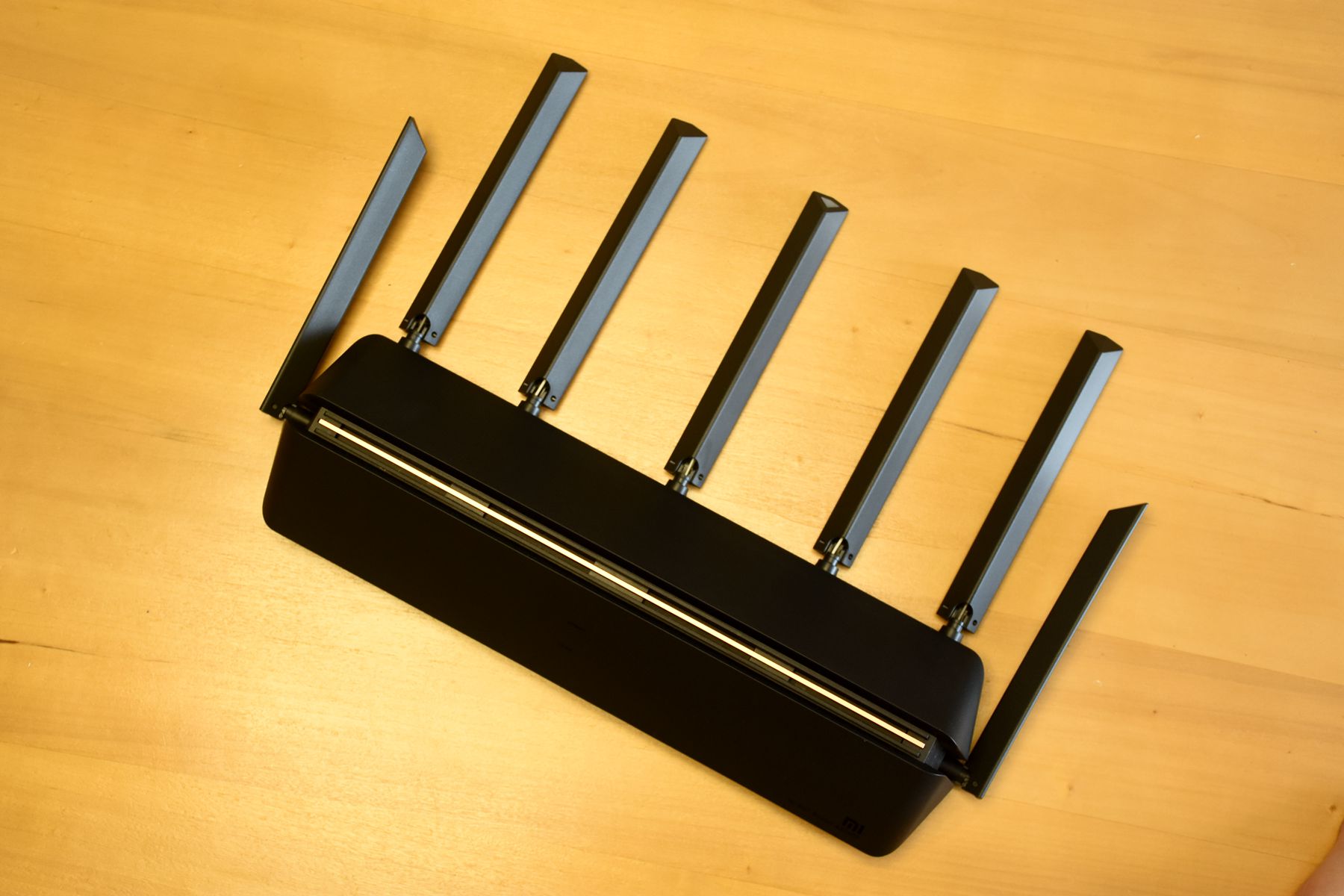 Take out the router, 7 antennas can be said to be very “understood” users. 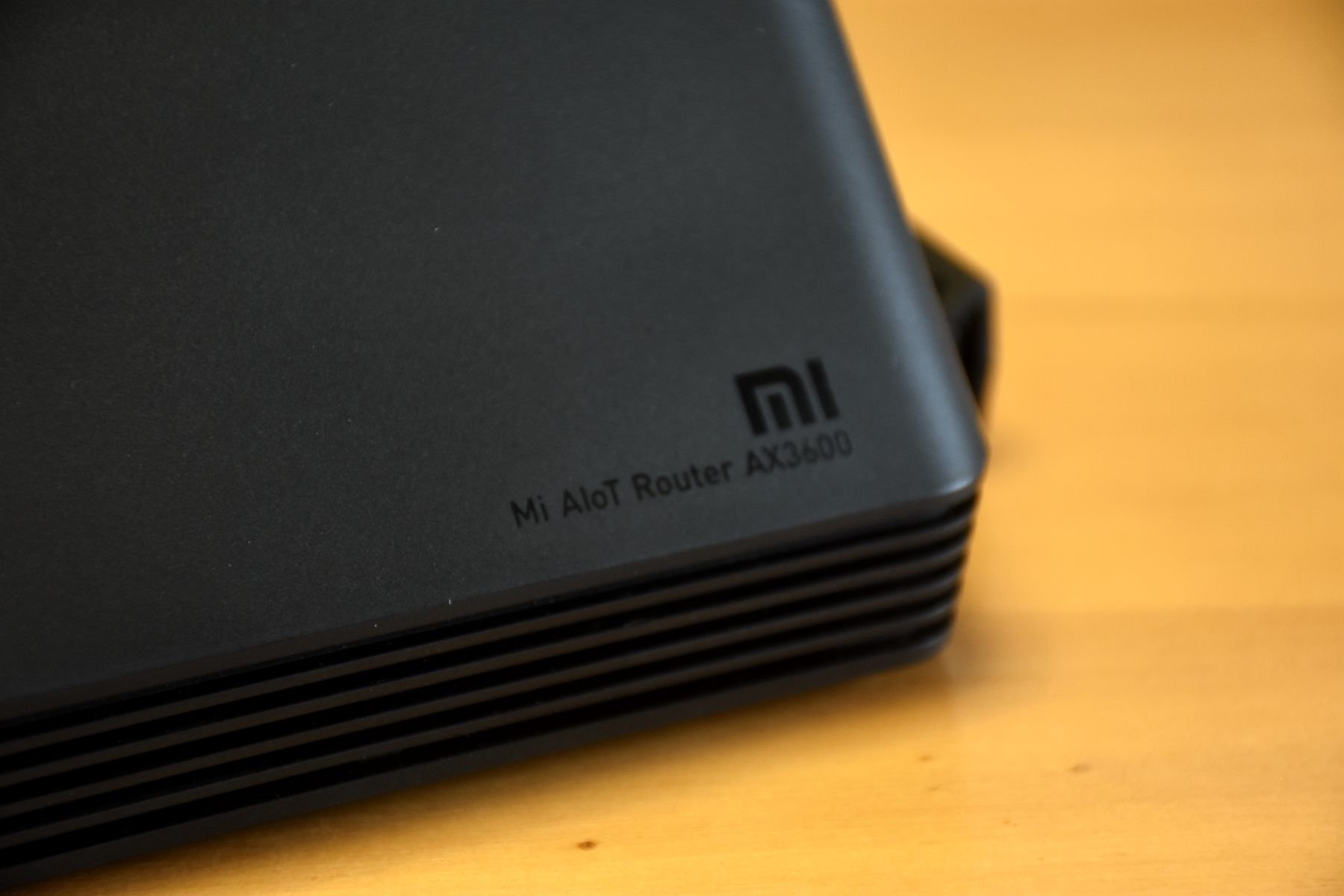 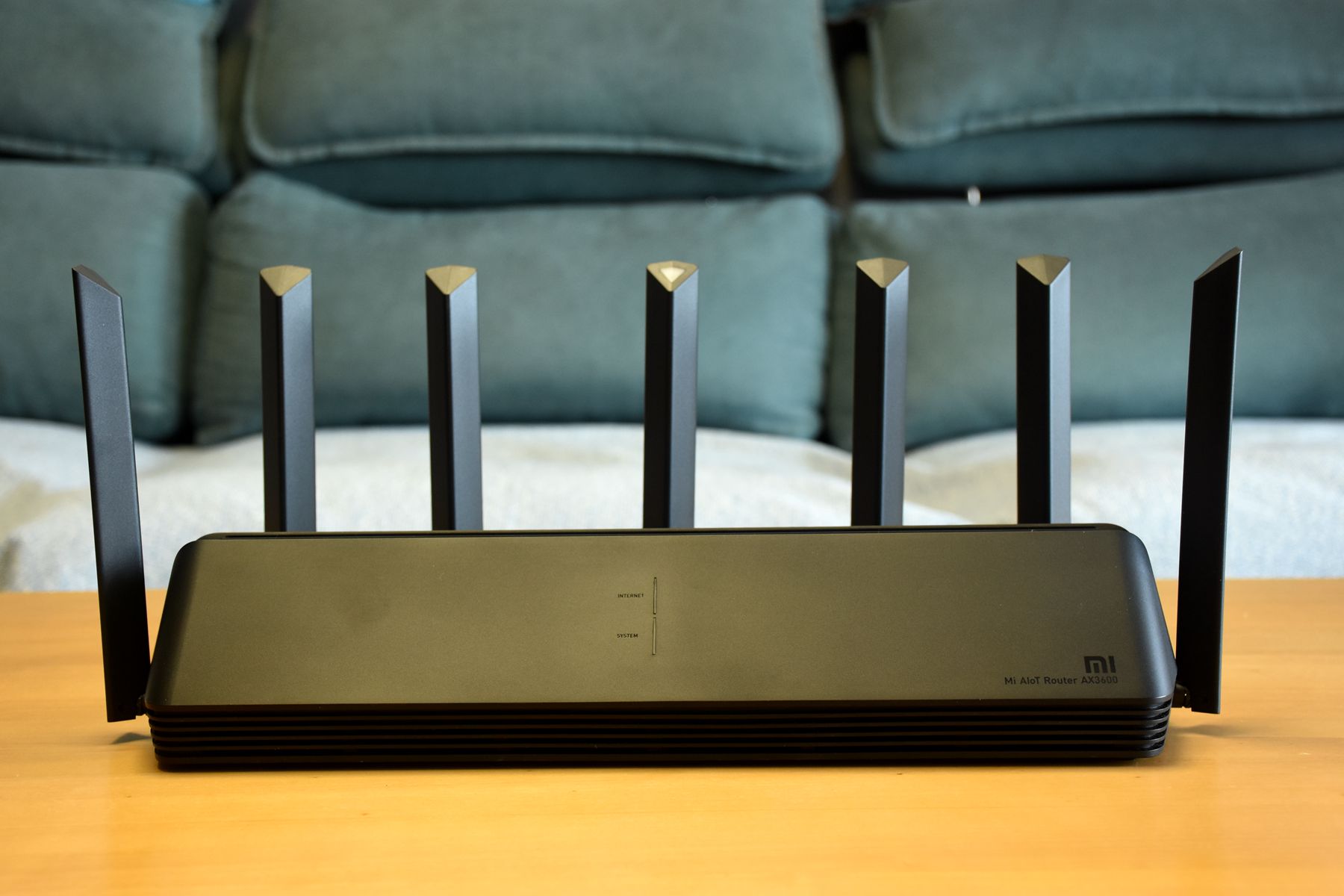 Unlike some previous Xiaomi router products that need to install their own antennas after unpacking, this time the AX3600 is already installed in the box, and it can be used directly by plugging in the network cable. 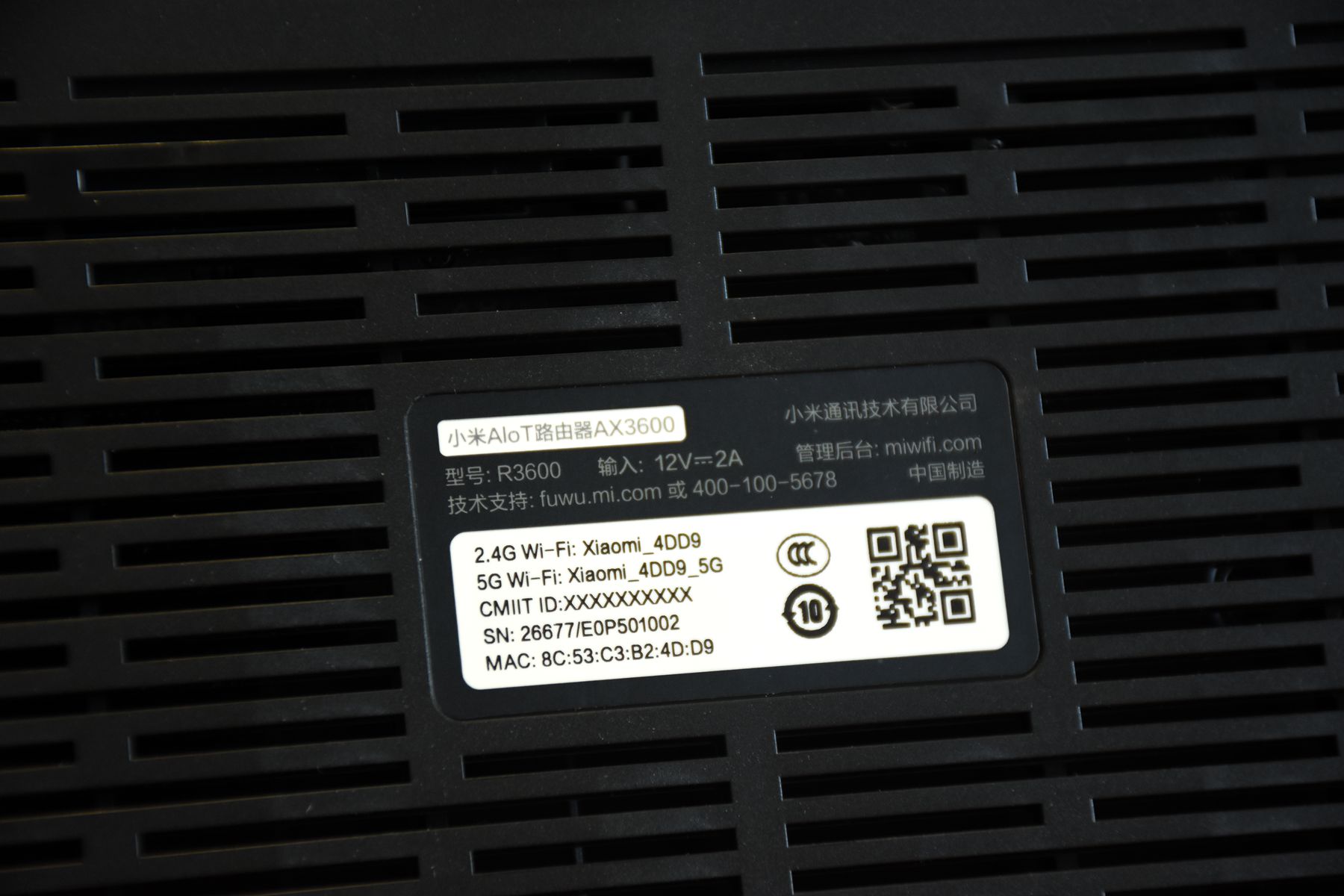 At the bottom, there are information such as the default Wi-Fi name and the management background address. 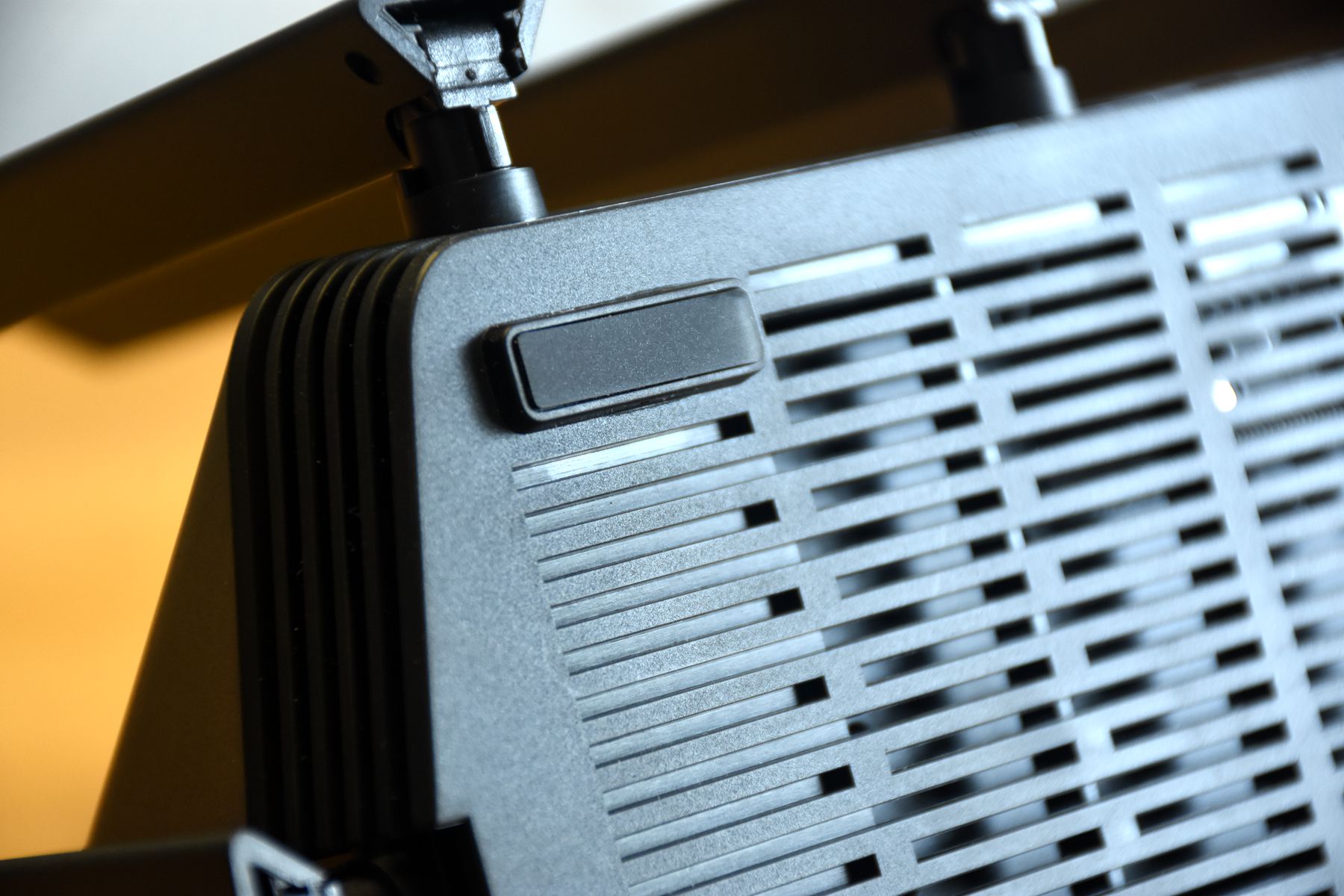 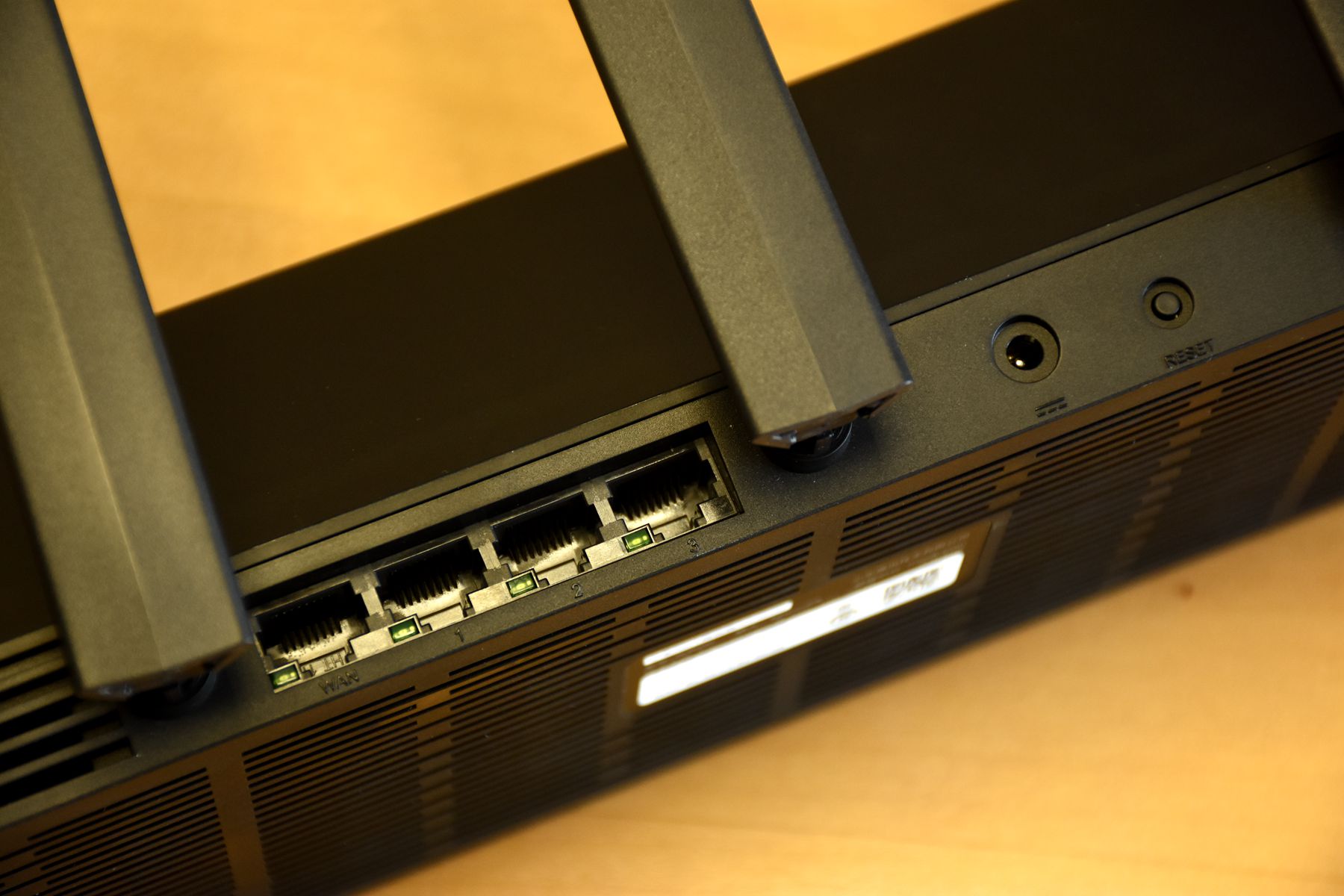 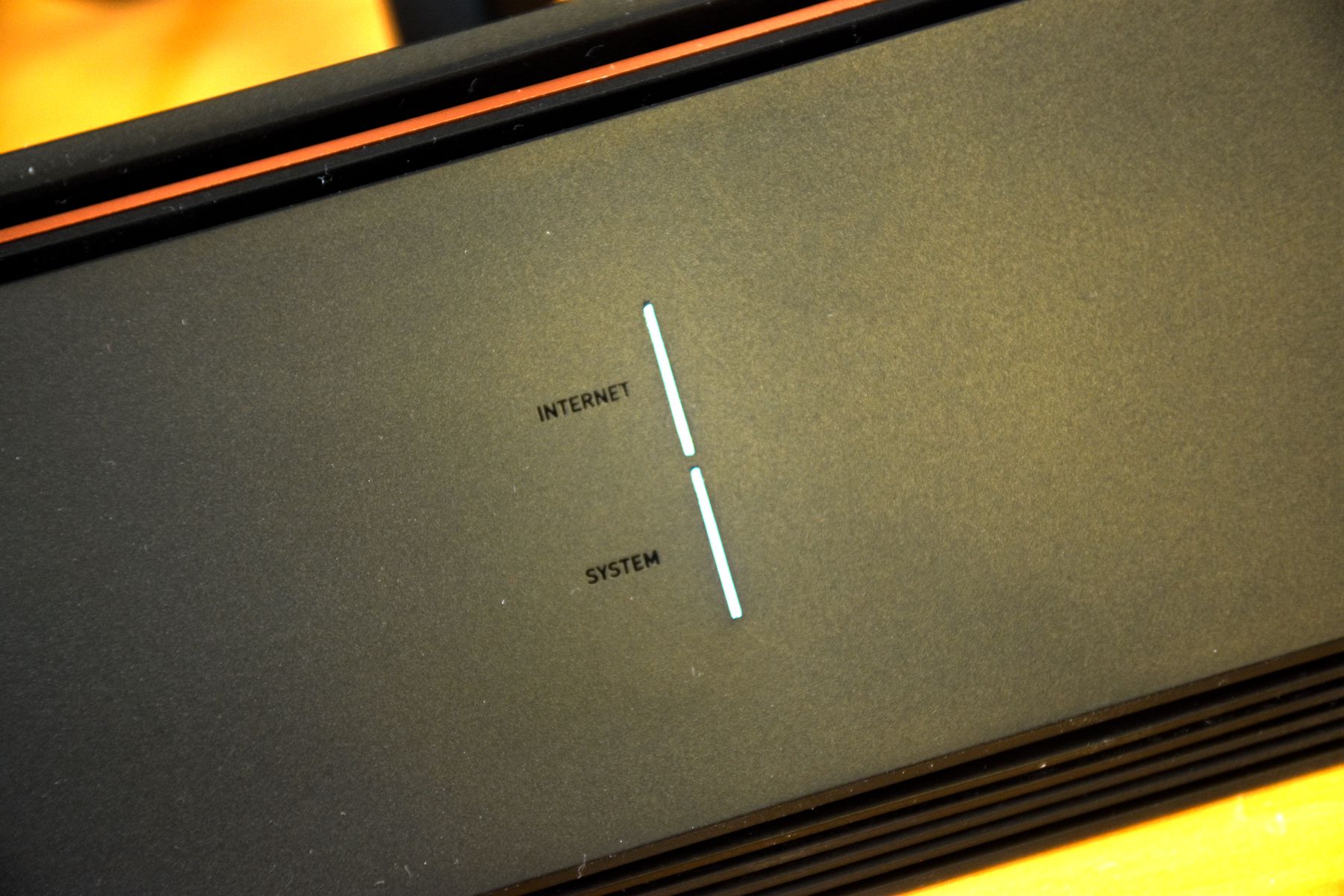 The design of the indicator light is relatively simple, and it is not dazzling at night 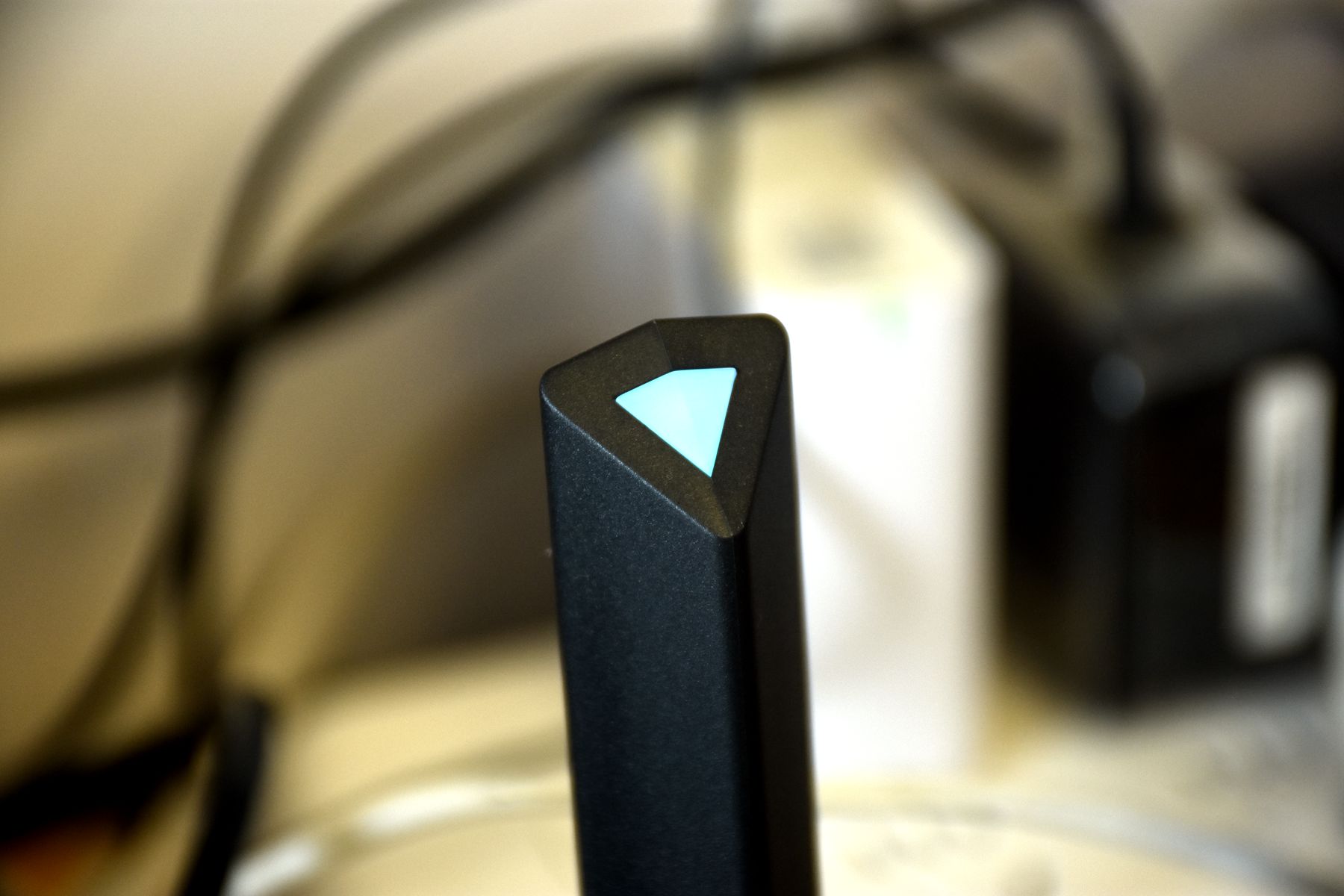 There is also a soft light indicator on the top of the middle antenna, which is also not dazzling at night

How is the signal of Xiaomi AIoT router AX3600?

No matter how good-looking the specifications are, it is no use if the actual experience is a mess. So, how is the signal performance of Xiaomi router AX3600? We actually experienced it. The test house type is shown in the picture above. The actual area of ​​the house is about 66 square meters. It has a three-bedroom and one-hall steel-concrete structure. The router is located near the TV cabinet in the living room without any metal shielding.

The mobile phone used for the test is the Samsung Galaxy Note 10+ 5G that supports Wi-Fi 6. During the test, it is connected to the 2.4/5GHz network in four locations, allowing Speedtest to check the delay and network speed.

Due to limited conditions, the test network bandwidth is only 200Mbps, so the limit rate of Wi-Fi 6 cannot be tested.

First is the location next to the router Under the 5GHz network, the bandwidth can reach 1.2Gbps, so it can easily reach the limit speed of broadband. Under the 2.4GHz network, the bandwidth is 229Mbps, the measured network speed is 143Mbps, and the delay is 7ms.

The second is position one, which is the second sleeping position: 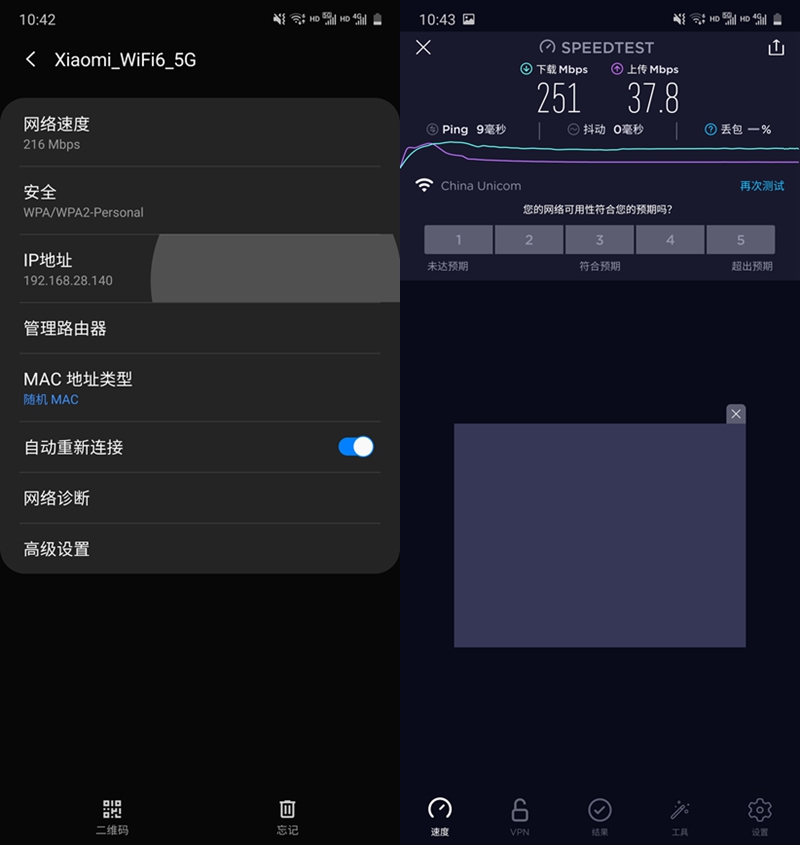 Since there is only one wall, the attenuation of the signal is not serious. The bandwidth under 5GHz is still 216Mbps, and the actual measurement can still run the full 200Mbps bandwidth. 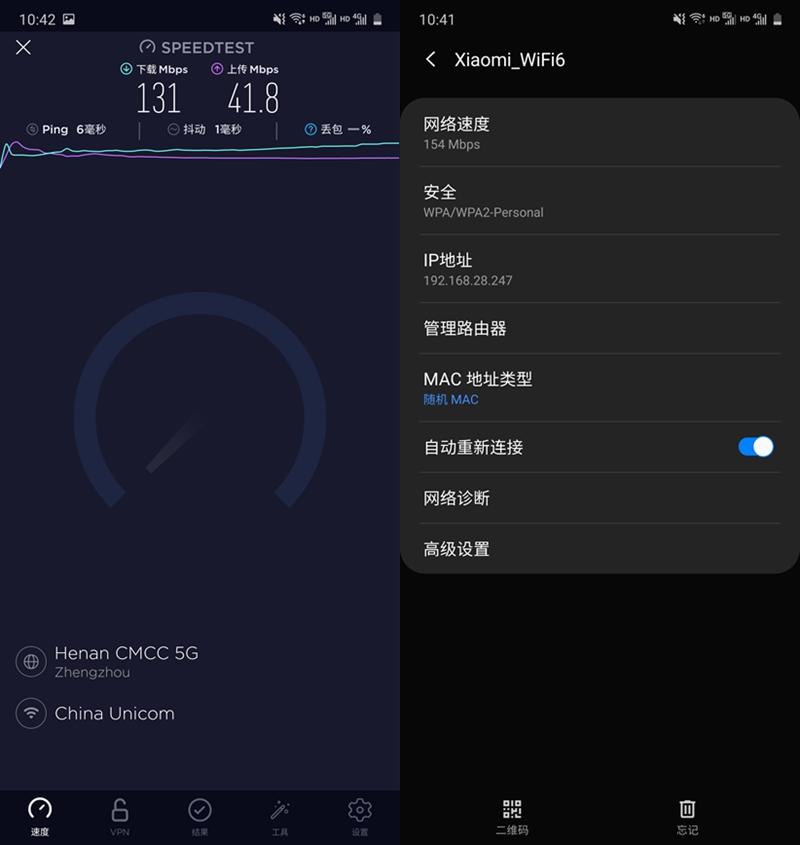 Under the 2.4GHz network, the network connection rate is 154Mbps, and the measured network speed is 131Mbps, which is the same as the living room performance. 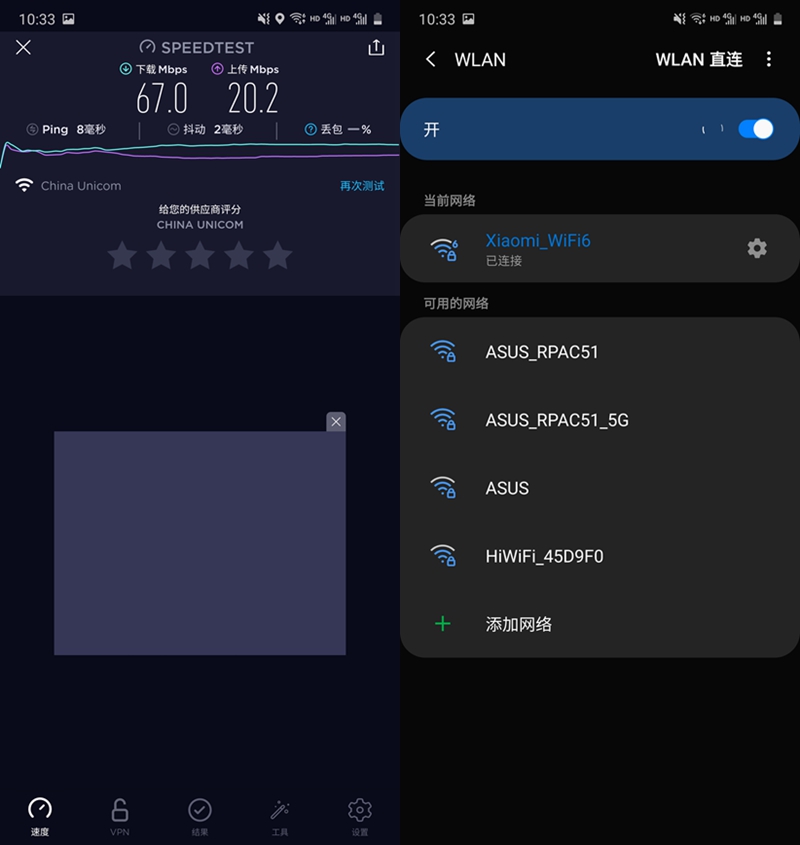 Due to the separation of two walls, the 5GHz signal cannot reach this area even in the through-wall mode, and the attenuation of the 2.4Hz signal is also serious. need. The quality of the bathroom network speed basically determines the length of time we spend on the toilet. The actual measurement can still run the full 200Mbps bandwidth at the third 5GHz, but the signal is not stable. 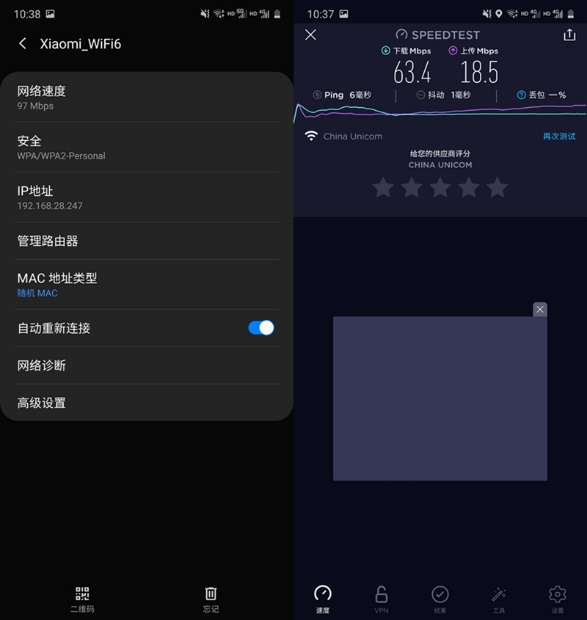 Under 2.4GHz, the measured network speed is 63.4Mbps, which can also meet the demand.

Through the test, the Xiaomi AX3600 router can fully meet the needs of a small apartment with three bedrooms and one living room. Basically, the 2.4GHz signal can cover the whole house, and the 5GHz signal can also cover the bathroom, but it is powerless for the master bedroom separated by two walls. .

In addition, after passing through the wall, although the attenuation of the 2.4Hz signal is obvious, the bandwidth can still meet the daily needs.

Obviously, if you want to buy a router that supports Wi-Fi 6 at the price of 599 yuan, the Xiaomi AX3600 can be said to be the best choice, and it is worth buying.

At present, some mid-to-low-end products from established router manufacturers can be purchased in the same price range on the market. The strengths of these products are strong stability and high playability, but there is no consideration of signal and firmware humanization. Internet manufacturers like Xiaomi have done a good job. For example, the Xiaomi router app can automatically discover brand-new router products after opening, without manual search, and the network configuration process is also very simple, and even provides a solution to directly copy network information from the old router.

The setting process is also clear at a glance, and you can get online in just a few steps, which is very convenient for some novice users. 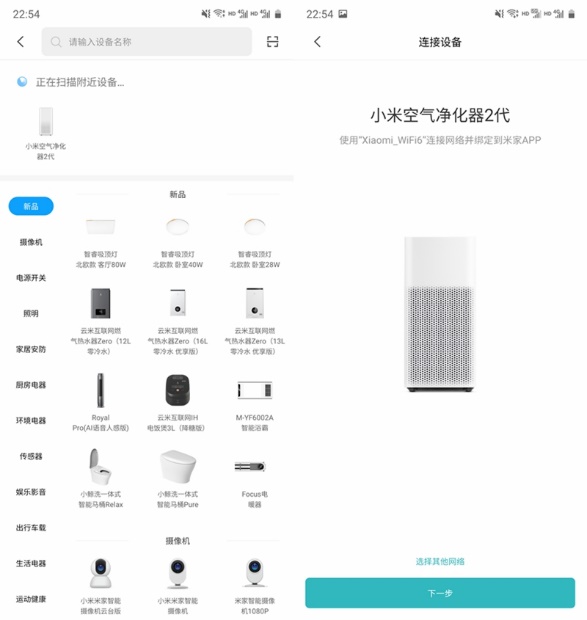 Looking at the current market, the price of AX3000-level products that also use 2+4 antennas is often more than 1,000 yuan, and the Xiaomi AX3600 has a great price advantage. Although cheaper Wi-Fi 6 routers also exist, and the Intel solution has nothing to be picky about, the 2+2 antenna design is not comparable to the Xiaomi AX3600 in terms of bandwidth and other aspects.

In addition, according to the official statement, Xiaomi AX3600 will also provide Mesh and 160M bandwidth support through software upgrades in the future. For large-sized users, it is very difficult to achieve coverage through a single router. It is a good choice to achieve mesh networking through two Xiaomi AX3600s.