From the perspective of product update speed, it is not a problem for Wi-Fi 6 to be popularized this year. Various terminals have been launched one after another, such as mobile phones and routers. The rapidity of popularization is surprising.

What is Wi-Fi 6? Wi-Fi 6 (802.11ax) is a new generation of Wi-Fi standards. Compared with the previous generation of Wi-Fi 5 (802.11ac), the transmission rate, signal coverage and data delay have been greatly improved. We carried out these tests. talk.

In addition to old router manufacturers such as TP-Link and Mercury, some mobile phone manufacturers have also released their own Wi-Fi 6 routers, such as Huawei, Honor, Xiaomi, etc. The price is generally above 200 yuan.

Now that Xiaomi has done it, Redmi will naturally follow. We got Redmi’s first Wi-Fi 6 router AX5 this time, and let’s take a look at its specific performance. 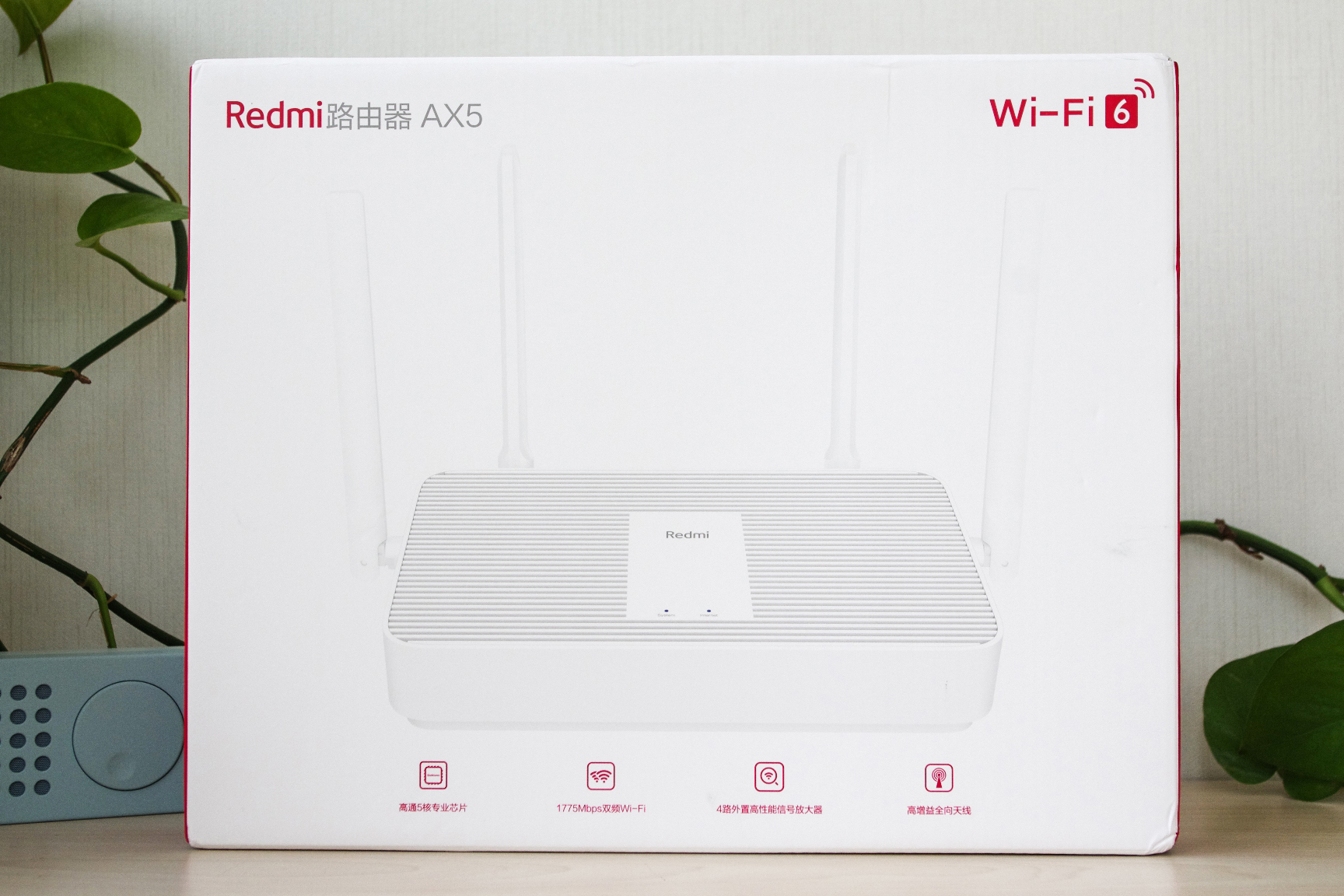 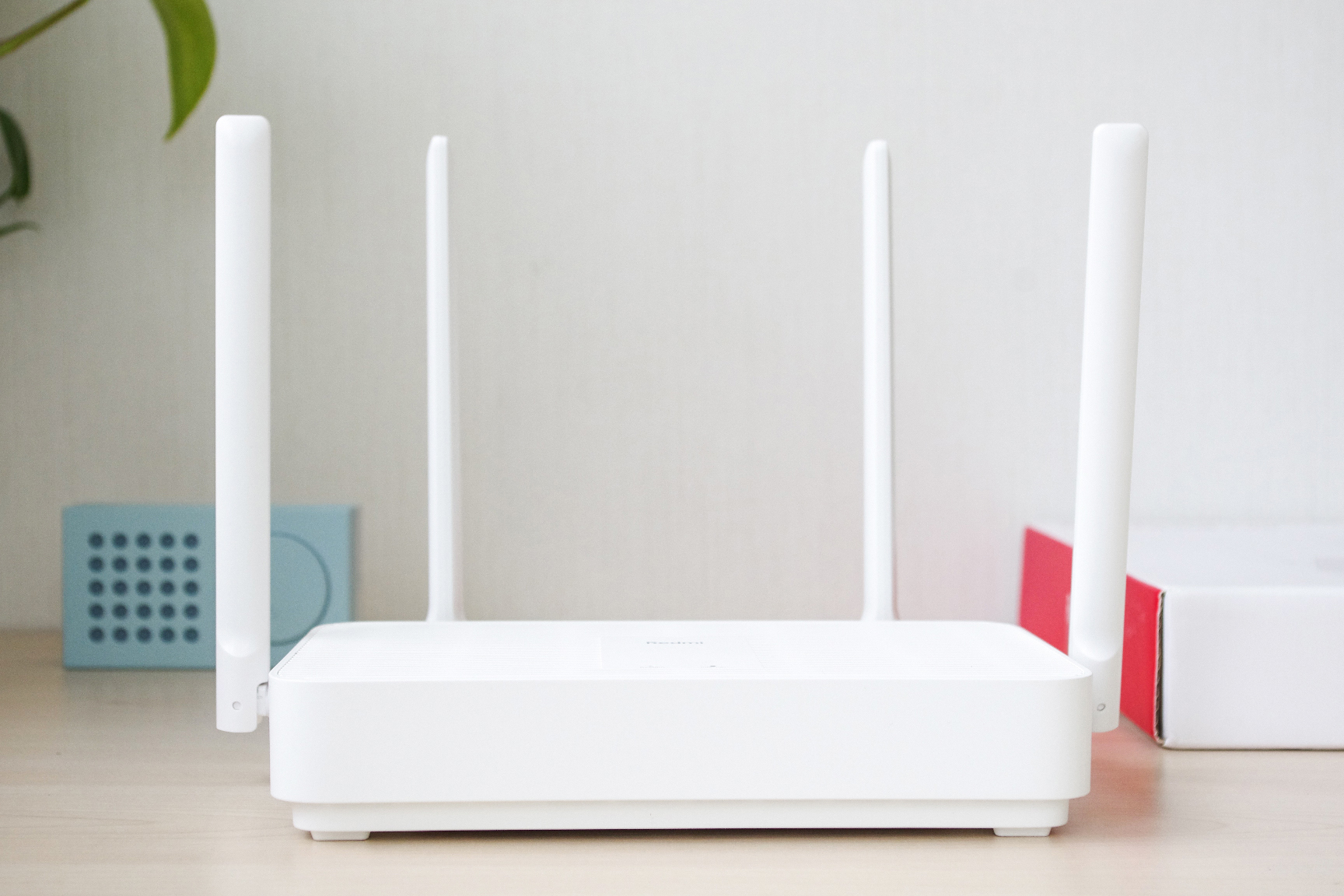 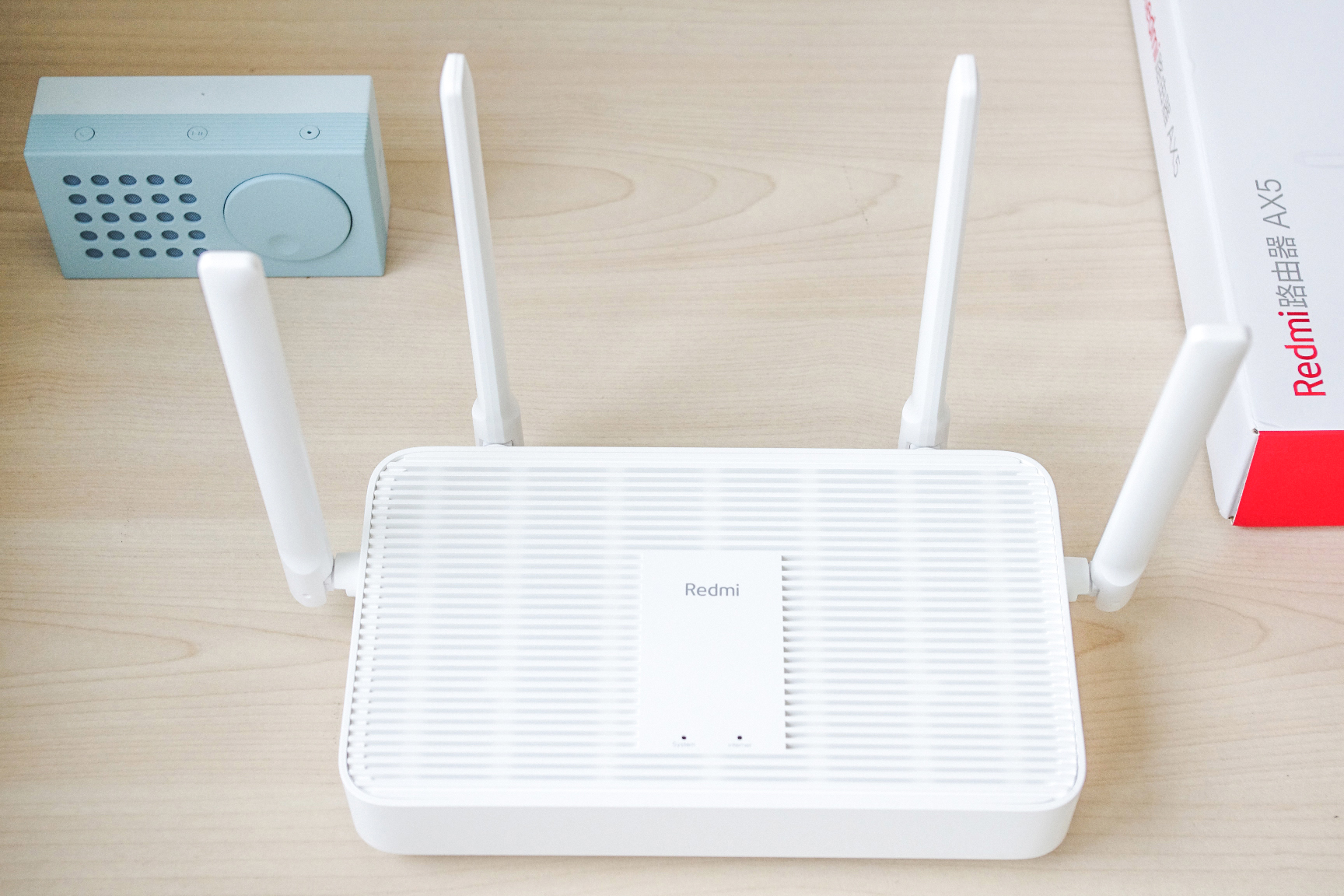 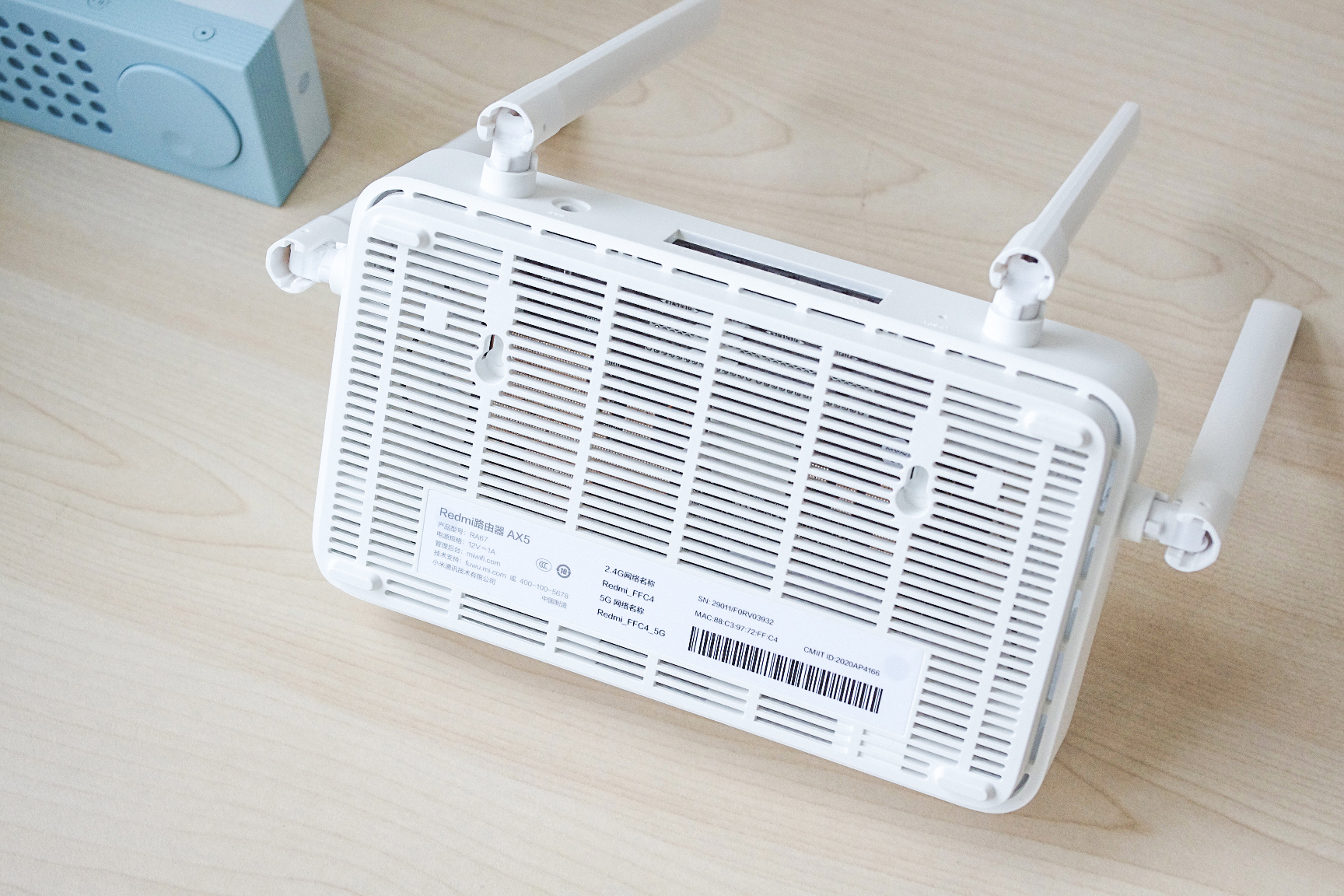 There are also a lot of cooling holes on the back 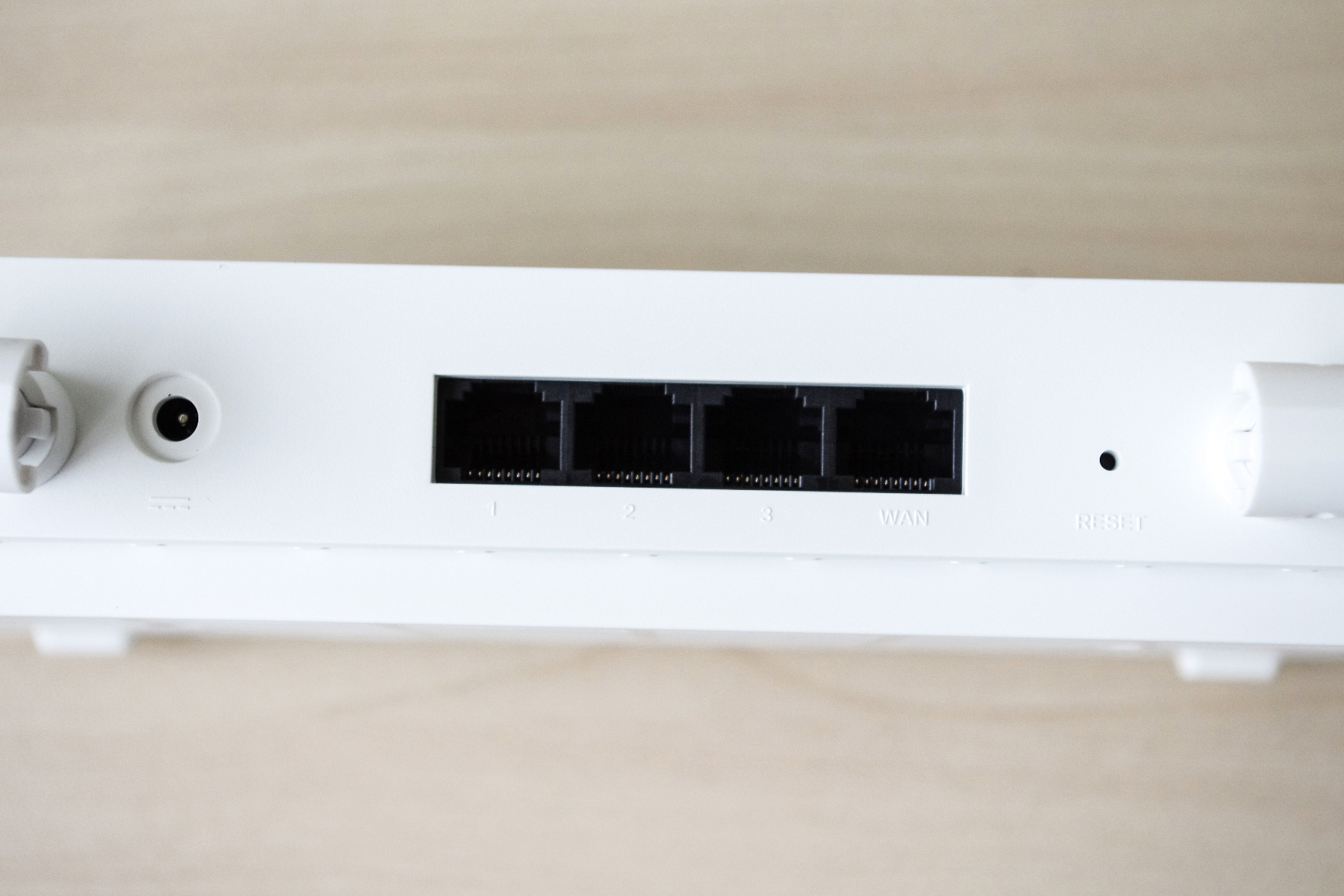 There are four ports on the rear of the router, which are the power port, 3* Gigabit LAN port, WAN port, and RESER button. 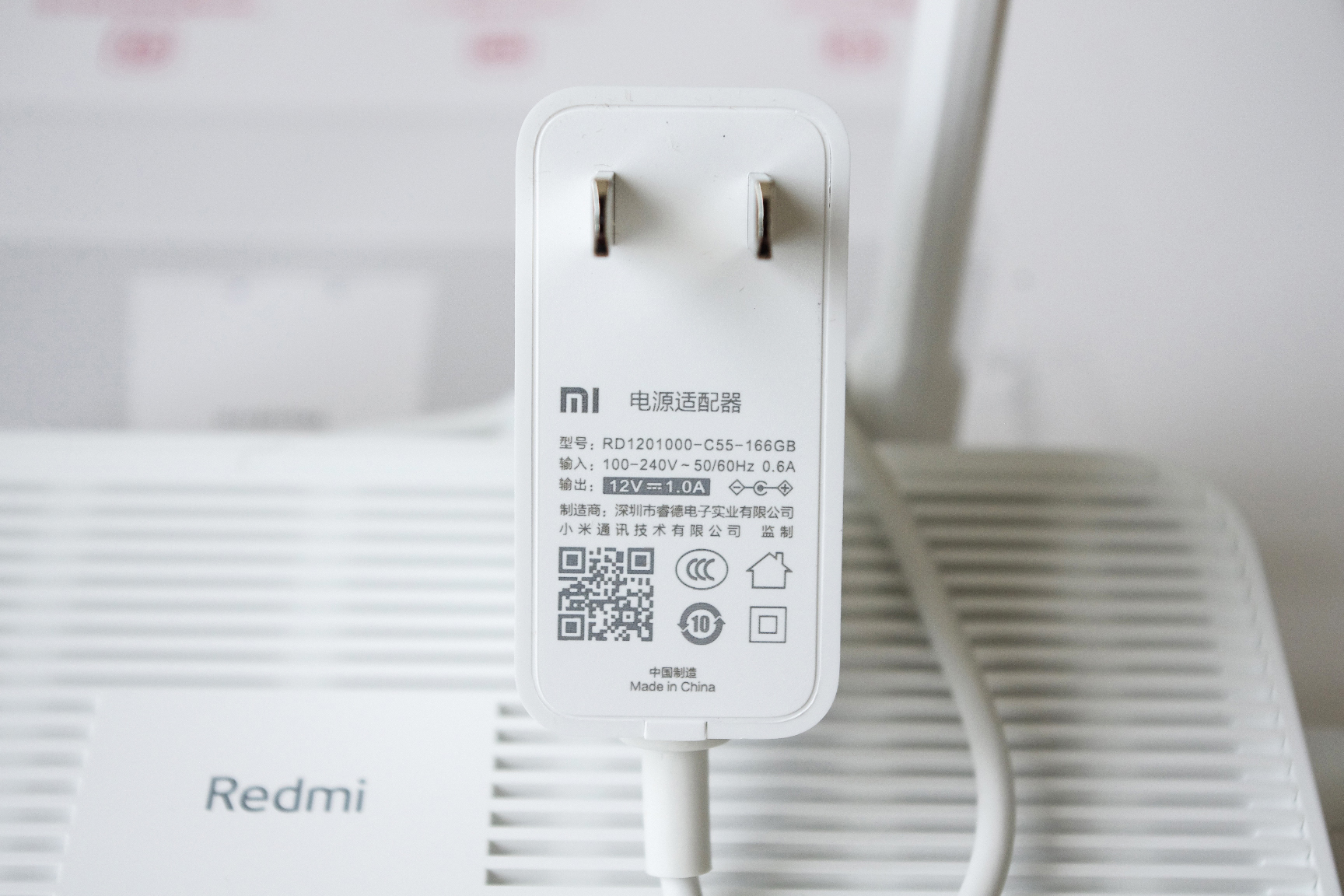 The Redmi AX5 power adapter has a power of 12V/1.0A. In addition, the package does not come with a network cable. Users can choose by themselves. It is recommended to connect a Category 6 or Category 6 super network cable. 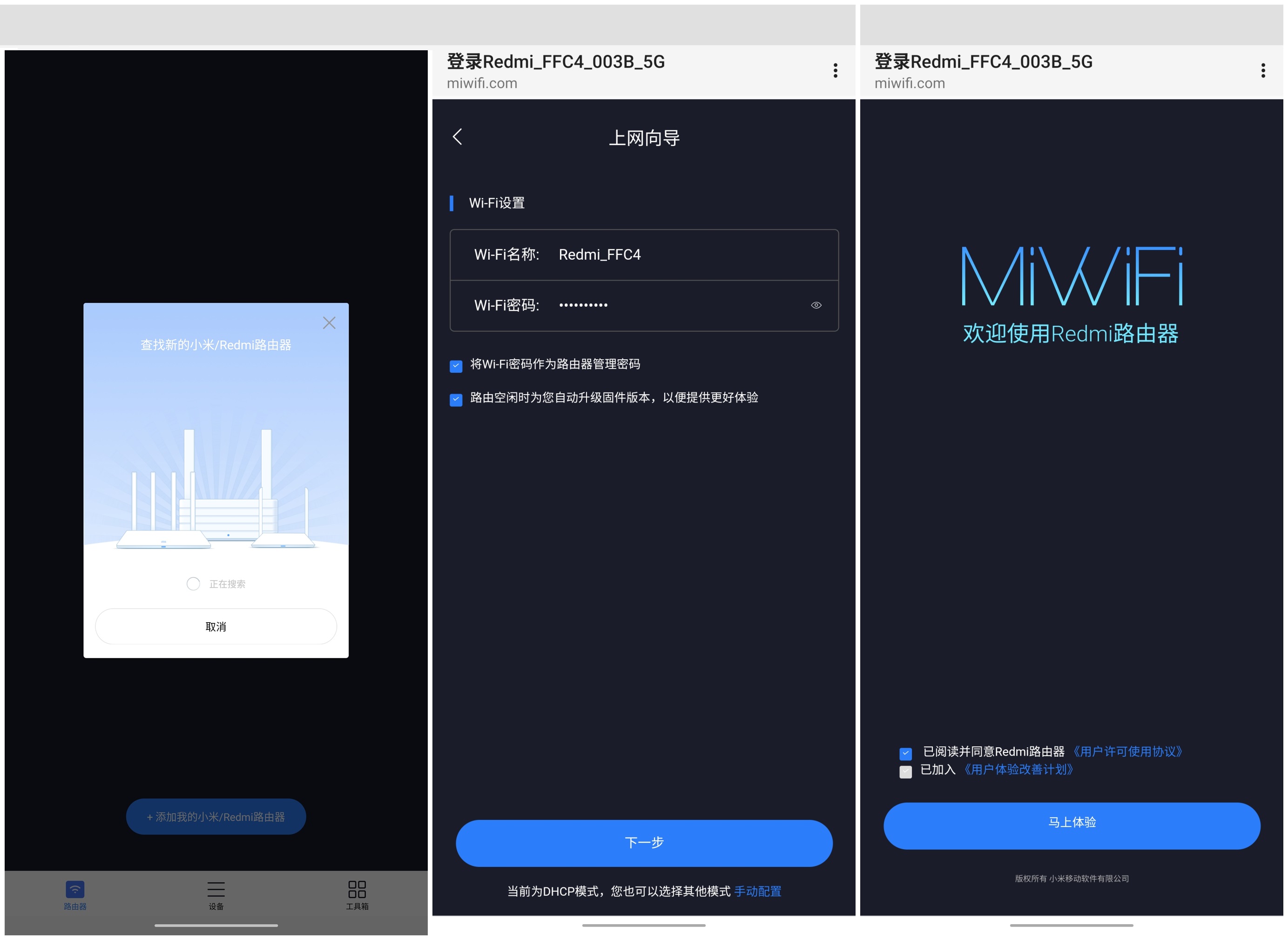 Taking the Xiaomi WiFi APP as an example, the connection can be completed in three steps, and the operation is simple and not complicated. 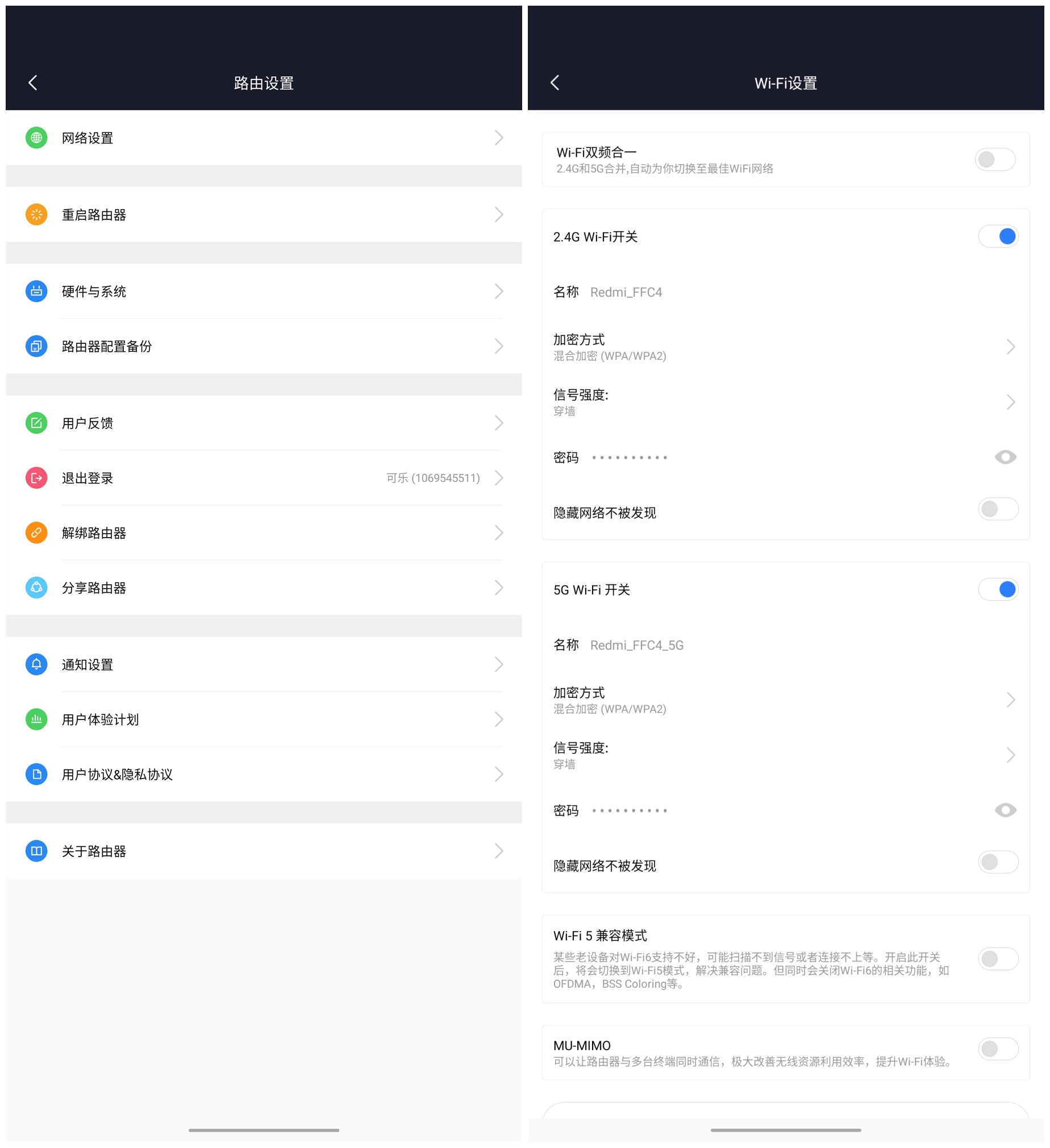 The toolbox has functions such as routing/Wi-Fi settings, anti-rubbing network, Wi-Fi optimization, children’s Internet protection, and guest Wi-Fi, which are easier to operate than web pages.

Before starting the test, let’s take a look at the parameters of the Redmi AX5 router and what is the improvement of Wi-Fi 6?

The Redmi AX5 is equipped with a Qualcomm 5-core CPU and the same processor as the AX1800, which is Qualcomm IPQ6000, but Qualcomm has not given its detailed parameters. The data given by Xiaomi is the latest 14nm process, 4-core 64-bit A53 1.2GHz CPU + single-core 1.5GHz NPU.

The memory is 256MB, the theoretical connection rate of Wi-Fi can reach 1775Mbps (dual-band concurrent), the data transmission rate can reach 1024QAM, the external 4-channel amplifier, the theoretical coverage is increased by 50%, the bandwidth of 80MHz, and the support of MU-MIMO and OFDMA technology.

Compared with the 256-QAM of Wi-Fi 5, what changes does 1024QAM have? In the Wi-Fi 5 AC protocol, a 5G band antenna is usually 433Mbps, and the Wi-Fi 6 AX protocol is increased to 600.5Mbps, so a higher QAM can obtain a more stable rate in a poor signal environment.

Like the Xiaomi Wi-Fi 6 router, the Redmi AX5 also supports MU-MIMO, OFDMA and other technologies. Among them, MU-MIMO can make multiple devices surf the Internet more smoothly. Users with larger apartment sizes are recommended to use multiple routers for Mesh networking. The same is true for the AX5. Support, it can be mixed with Xiaomi AX3600/AX1800 for networking. 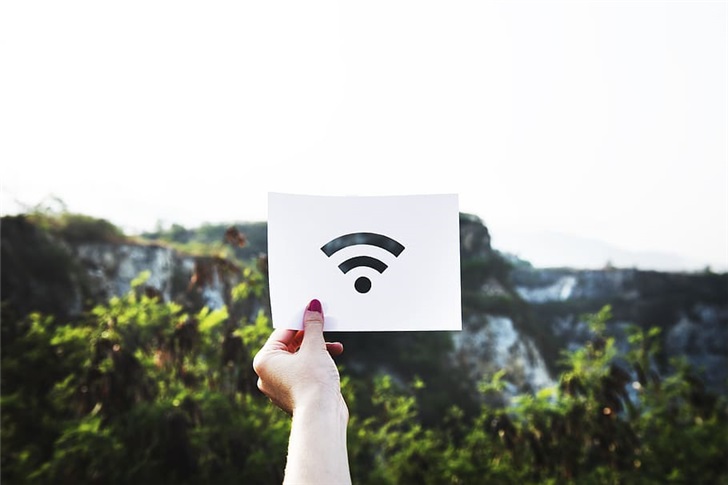 OFDMA technology is the evolution of OFDM technology. Generally speaking, it can transmit more devices at a time for data transmission, and use frequency division multiplexing technology to subdivide the resources of Wi-Fi channels again, distribute them to each device, and reduce network delay at the same time.

Bandwidth refers to the effective bandwidth corresponding to the frequency band channel. The higher the bandwidth, the faster the transmission rate. It has nothing to do with the ability to pass through the wall. Our common Wi-Fi 5 routers are divided into 20MHz, 20/40MHz, 40MHz, 80MHz (5GHz introduction), And Wi-Fi 6 has been upgraded to 160MHz ultra-high bandwidth, how fast is the speed? Take the 40MHz bandwidth of 2.4GHz and the 80MHz bandwidth of 5GHz to see the comparison, which doubles the rate.

However, it should be noted that the Redmi AX5 only supports 80MHz bandwidth, but most mobile phones that support Wi-Fi 6 also support a maximum bandwidth of 80MHz, so it is enough for Wi-Fi 6 models.

In addition, compared with Wi-Fi 5, the single-stream bandwidth of Wi-Fi 6 can reach 1200Mbps, and the frequency of broadcasting wireless signals is higher, which makes the device connection more stable, and the maximum bandwidth is increased to 9.6Gbps, but it must be 8×8 to run full. , so it is only a theoretical value. 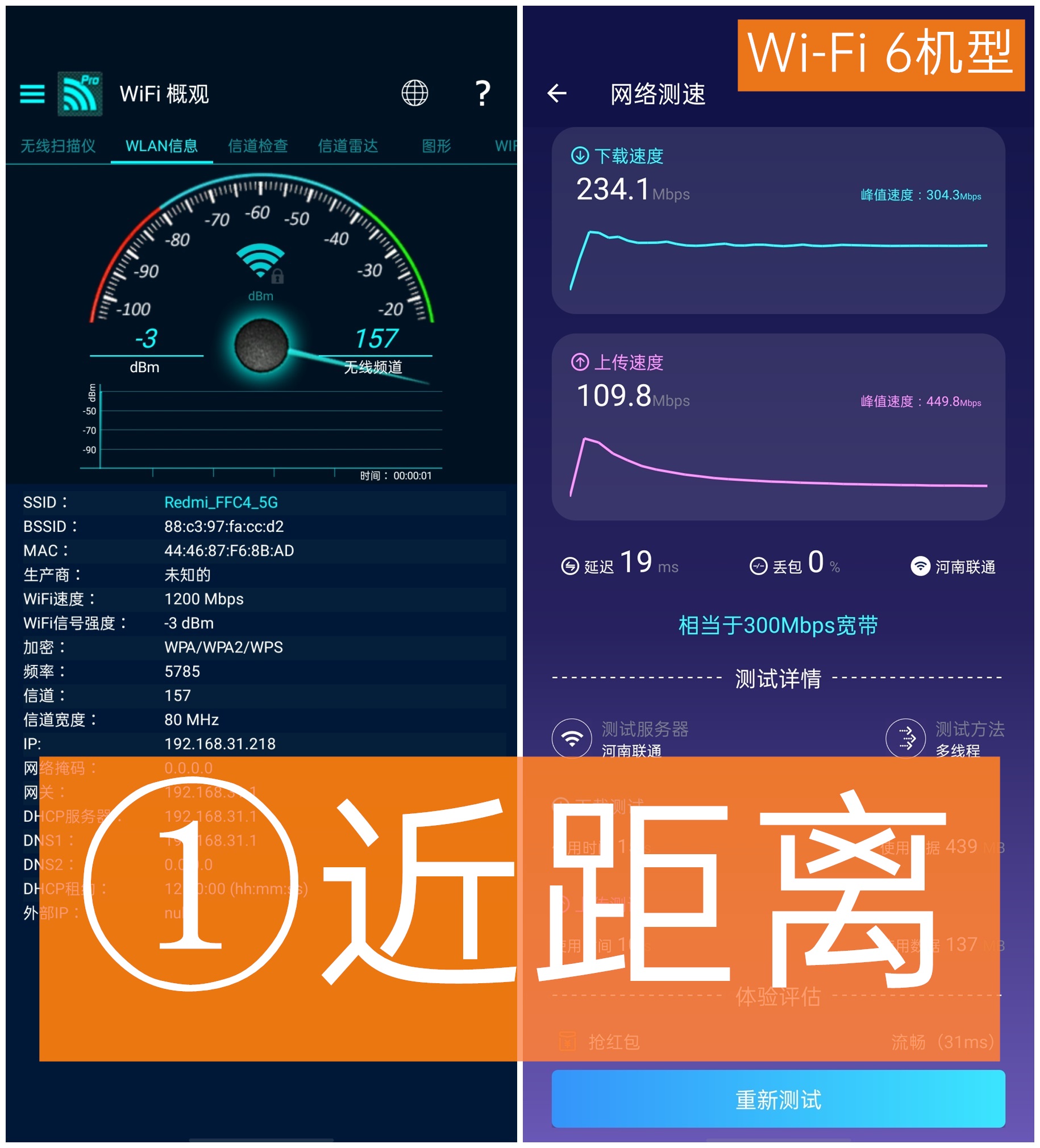 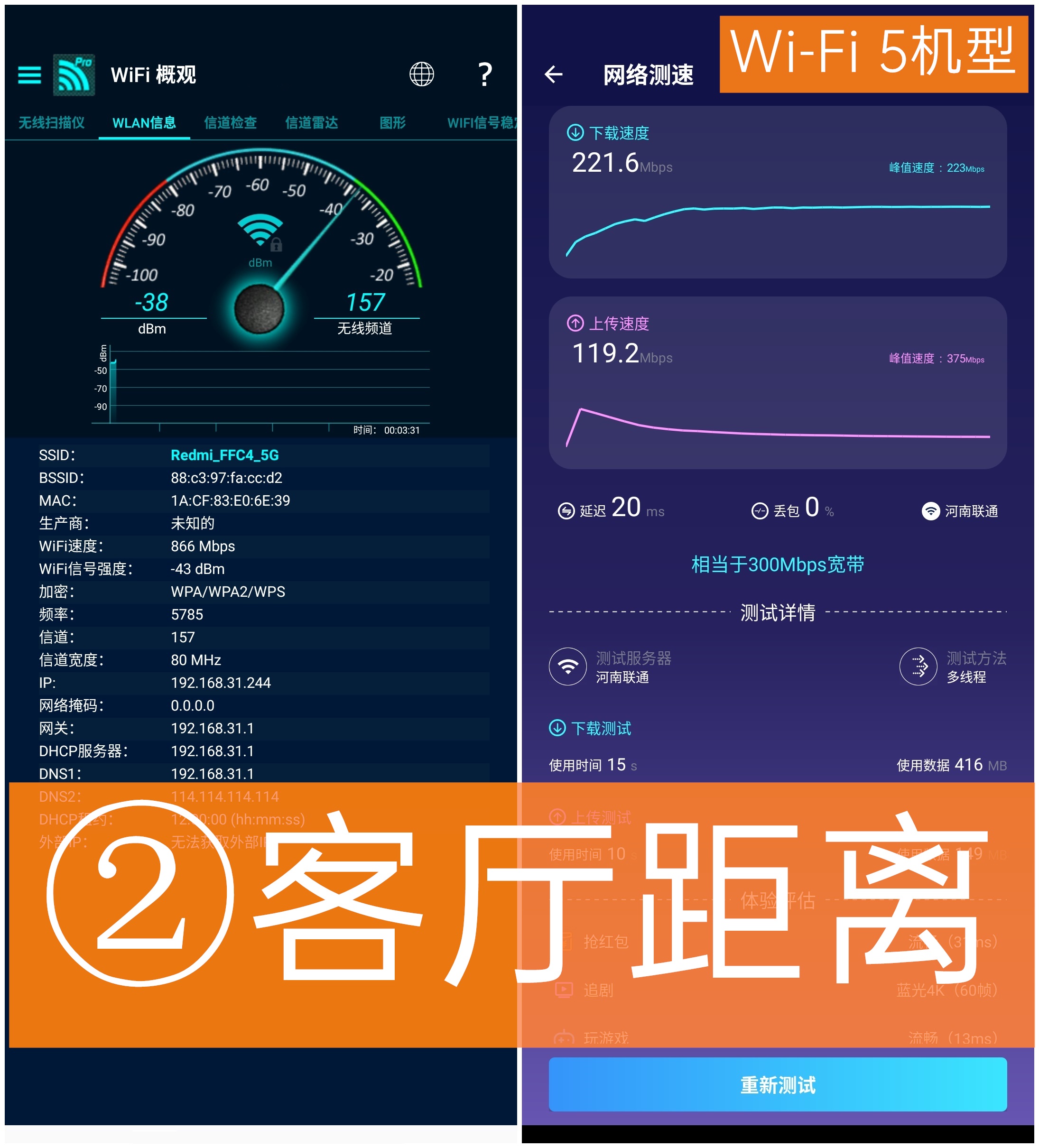 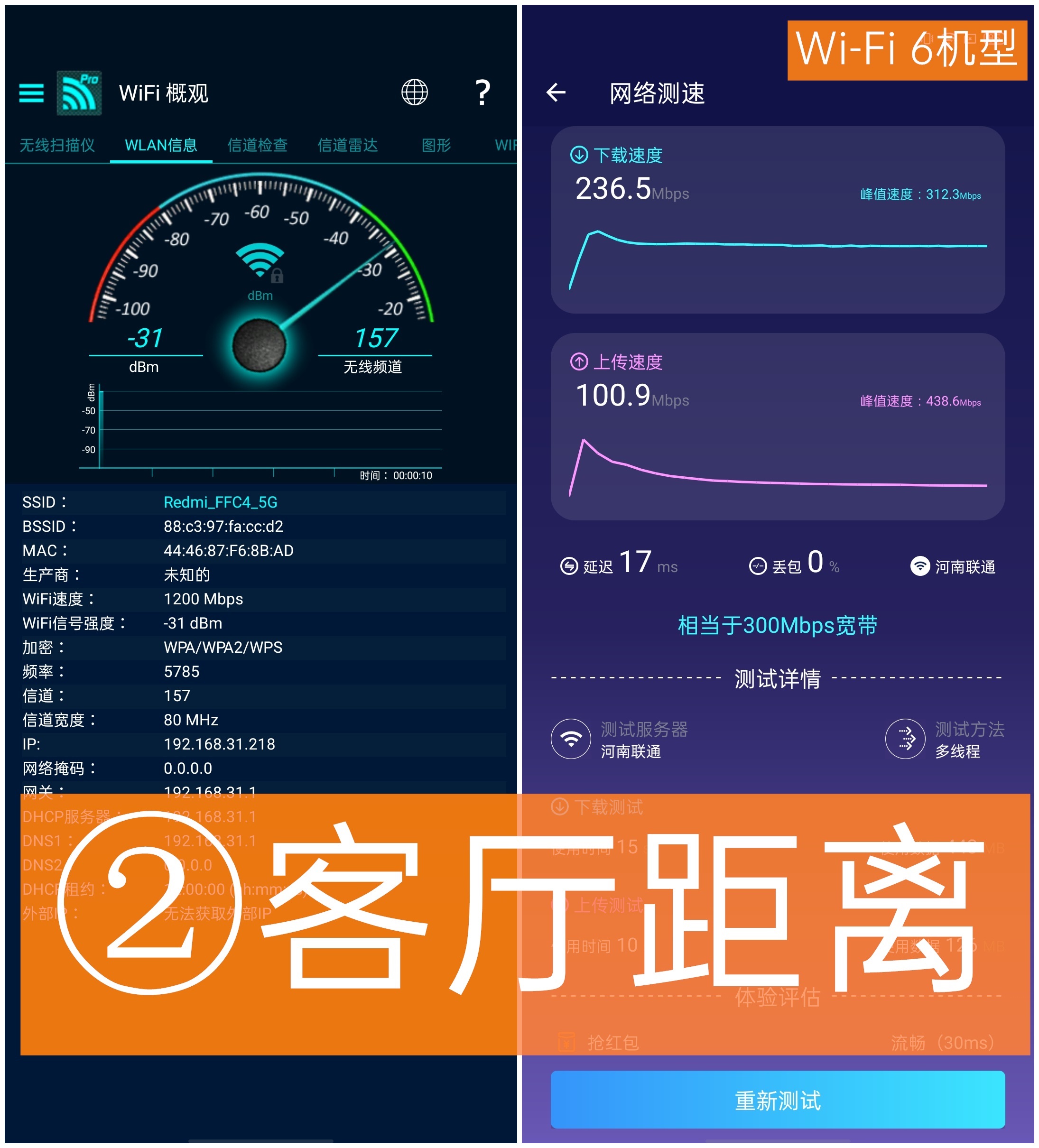 The Wi-Fi 6 model has a download speed of 236.5Mbps and an upload speed of 100.9Mbps from the living room distance. 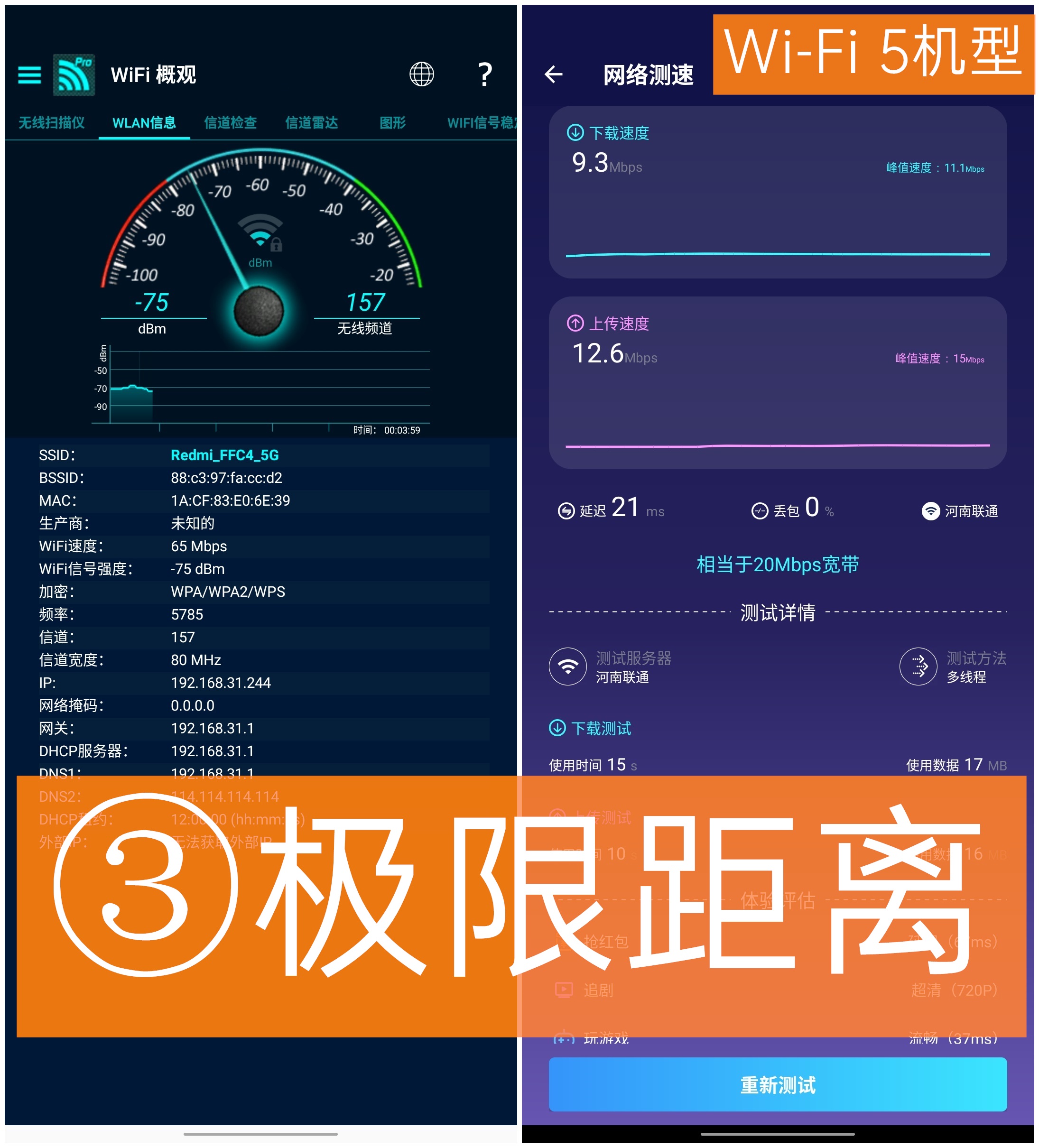 After testing, the Wi-Fi 5 model has a download speed of 9.3Mbps and an upload speed of 12.6Mbps at the limit distance. 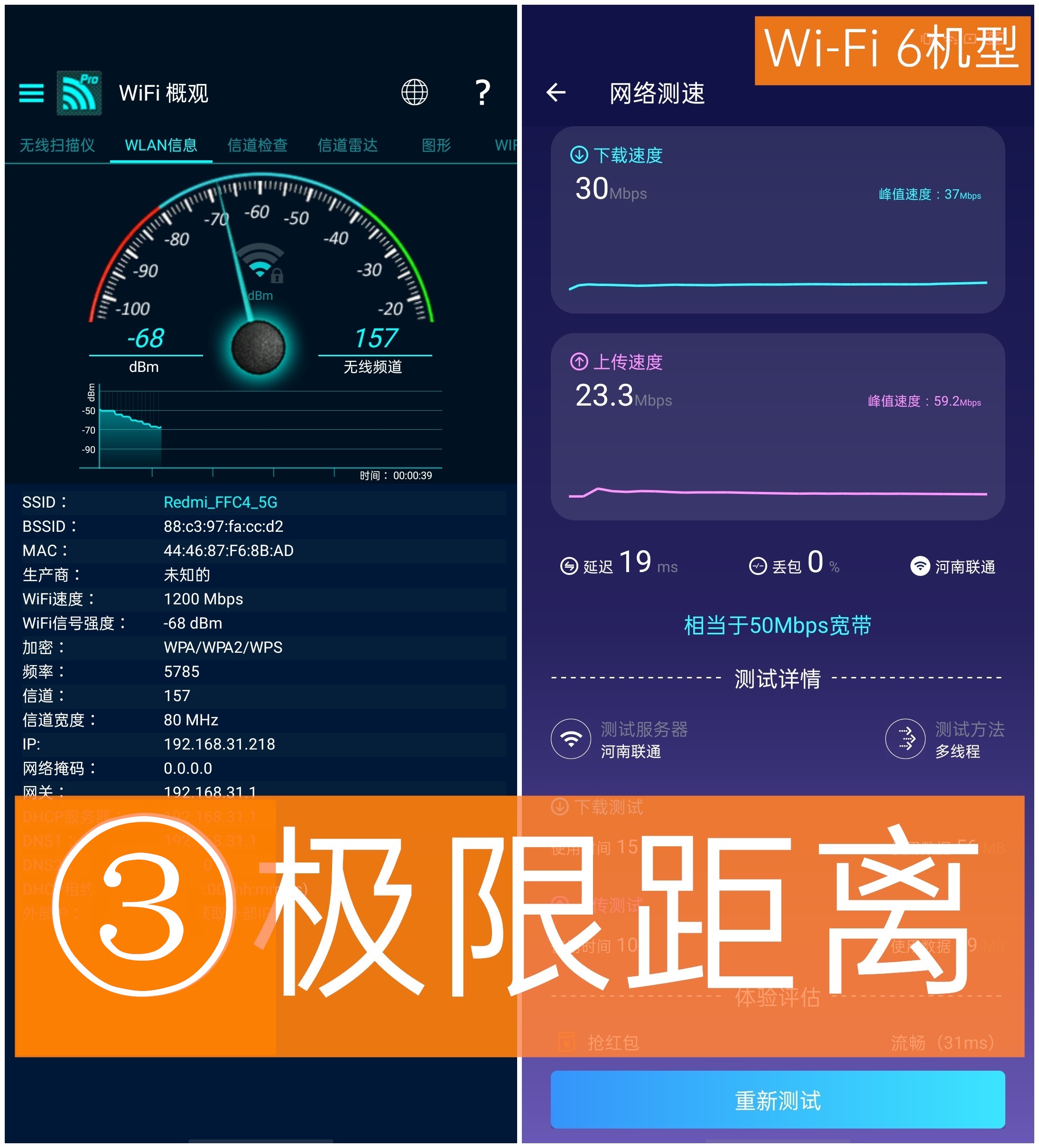 The test results are as follows:

It can be seen from this that the Wi-Fi 6 model is more stable in connection with the Redmi AX5, and can maintain a stable rate even at extreme distances; compared to the Wi-Fi 5-only model, it has doubled.

In addition, thanks to the characteristics of Wi-Fi 6, the Redmi AX5 also has a good delay, especially when the access device also supports Wi-Fi 6, the delay can be controlled below 20ms, which is very necessary for users who like to play games.

From the configuration point of view, the Redmi AX5 and Xiaomi AX1800 are basically the same, but the appearance has been changed, and the price has been adjusted accordingly, and 3 months of Tencent Online Game Accelerator members will be given for free.

In terms of functions, Redmi AX5 supports multiple Mesh networking, which can be mixed with Xiaomi AX3600/AX1800, but we don’t support this one yet, it should be a follow-up upgrade push, Mesh networking can realize seamless connection of multiple routers . 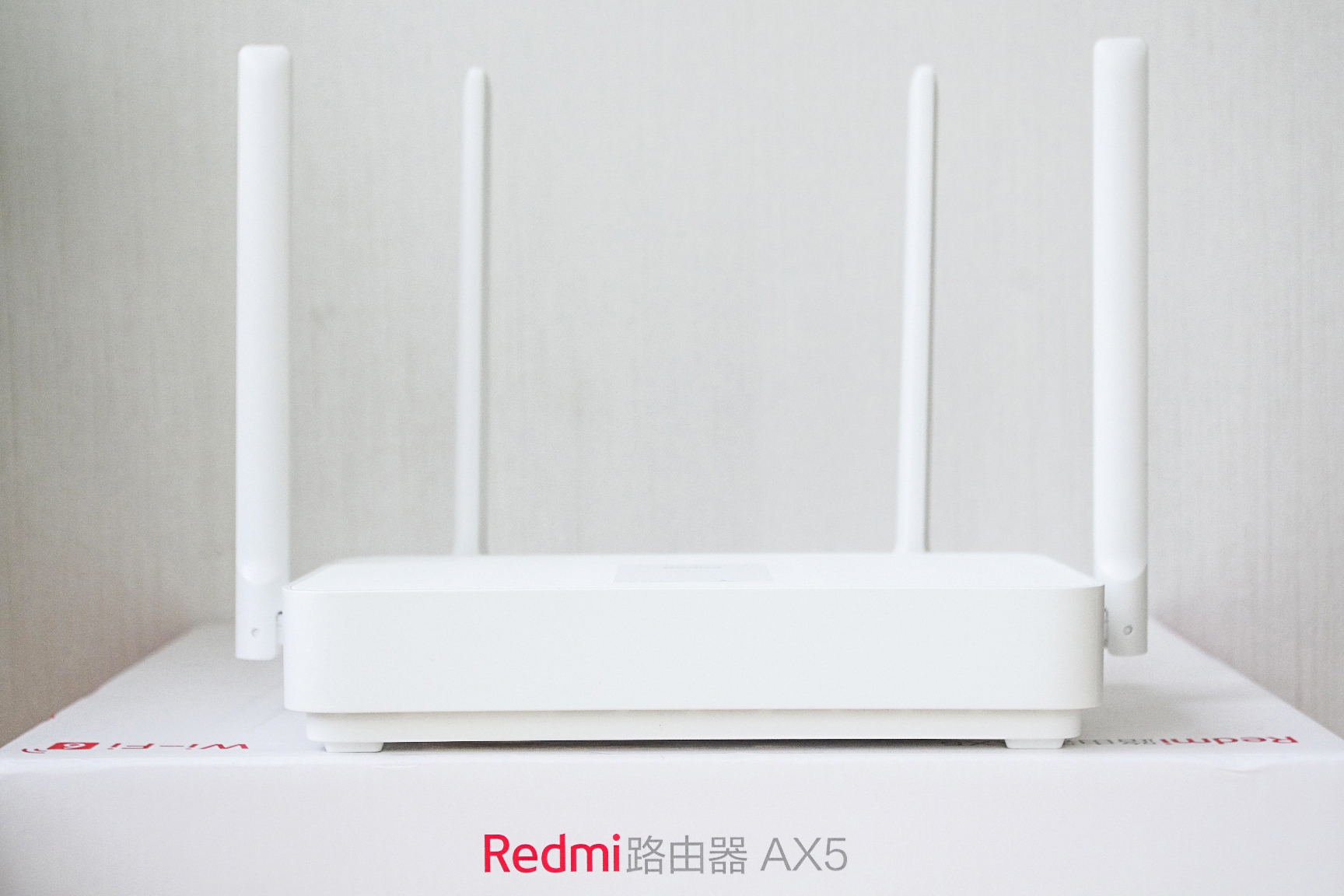