Looking back at the first half of the year, flagship mobile phones are still a combination of cutting-edge technologies, such as better and better screens, higher charging power, more powerful imaging capabilities, etc. The core configuration is naturally Qualcomm’s flagship Snapdragon 888 mobile platform , but different from the past, this year’s mobile phone SoCs are diversified.

The diversification we mentioned earlier is mainly due to MediaTek. In the first half of the year, a number of models equipped with the Dimensity 1100/1200 appeared. Although the performance is definitely not as good as the Snapdragon 888, it is better than the price. Weakness”, the latter has indeed been a bit reluctant to make progress in the mid-to-high-end field in the past two years.

Because of this, MediaTek fought a beautiful turnaround with the Dimensity series and won the world’s largest smartphone chip supplier.

In terms of mobile phones, what is their performance? Without further ado, let’s take a look at the Android mobile phone performance list in June 2021. The time for data statistics is from June 1st to June 30th, 2021. The results in the list are the average scores instead of the highest scores, and the data statistics of a single model are > 1000. If a single model has multiple The storage capacity version is on the list, and the version with the highest score is the main one. 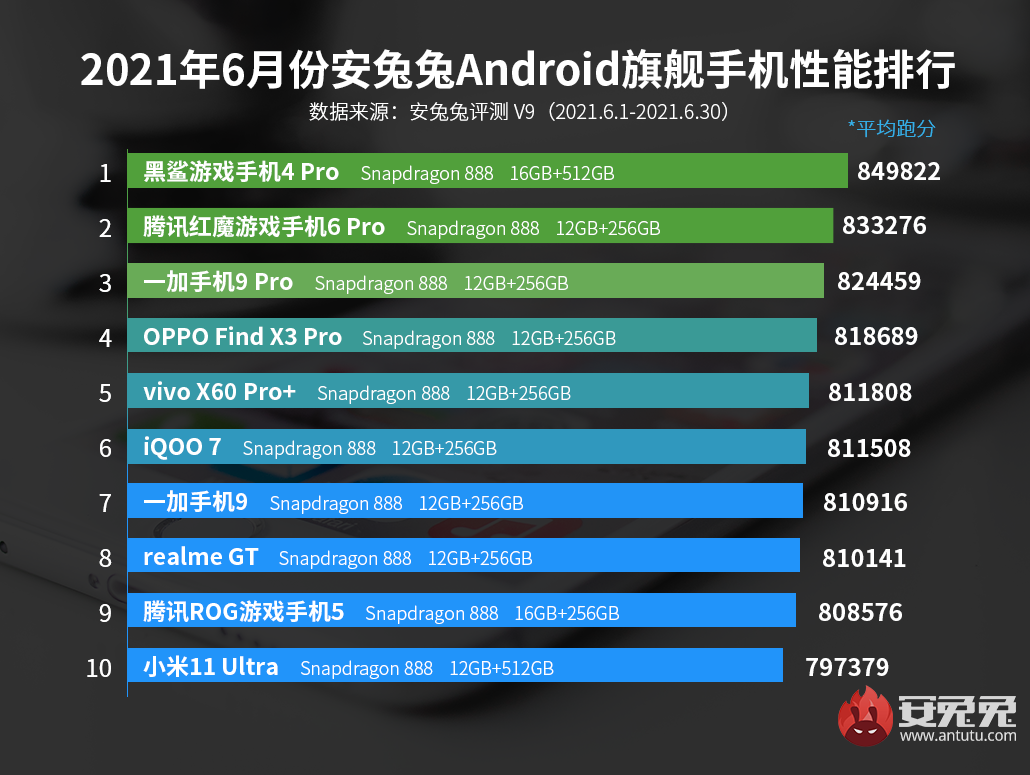 Compared with last month, the overall list has not changed much. The first-ranked model is still the Black Shark 4 Pro, with an average score of 849822. By checking the sub-scores, we can see that the advantage of this phone is still there. In terms of storage, the MEM score is the main point. Thanks to the built-in SSD+UFS 3.1 flash memory combination, the storage capacity is greatly improved, and the cards are not played according to the routine.

Other results are relatively normal, and even not as good as the second-ranked Tencent Red Devils gaming phone 6 Pro, so based on performance, the Black Shark 4 Pro’s scheduling is not as aggressive as the Red Devils. Of course, the latter’s fan cooling is also unreasonable. The air cooling of the Red Devils has become more and more mature. It is not only as simple as a built-in fan, but also changes the internal structure of the fuselage to make it better heat dissipation, so the average score reached 833276. If the Black Shark 4 Pro is not so aggressive in using SSD, then It is still two to say who will win the first place in the performance list.

As we said last time, although the two gaming phones have excellent performance and crazy configuration, they are too focused on performance, giving up the weight of the body or the beautiful appearance, which is suitable for enthusiasts who like to play games.

The third-place model is the OnePlus 9 Pro, with an average score of 824459. The phone runs ColorOS for OnePlus. According to feedback from some users holding the phone, the performance scheduling is not as aggressive as the original hydrogen OS, so why is this feature so good? score? It is speculated that some users have performed flashing and rooting, reused the hydrogen OS, and pulled the performance scheduling to the highest level, so the running score has also been significantly improved.

Moreover, the performance of the machine is not so conservative. After opening Mobile Update, it will automatically close the app running in the background, and automatically obtain the best running score status.

Others on the list are all powered by the Snapdragon 888, which is not much different from the previous issue. However, in the second half of the year, or even the fastest next month, there will be a ranking change in the flagship performance list, because Qualcomm recently released the Snapdragon 888. Plus, the theoretical performance has been improved again, and it has been tested by manufacturers, so the release of the new phone is just around the corner.

Next is the performance ranking of Android mid-range mobile phones. In June, a number of new mid-range phones were released, so the ranking has changed a lot. 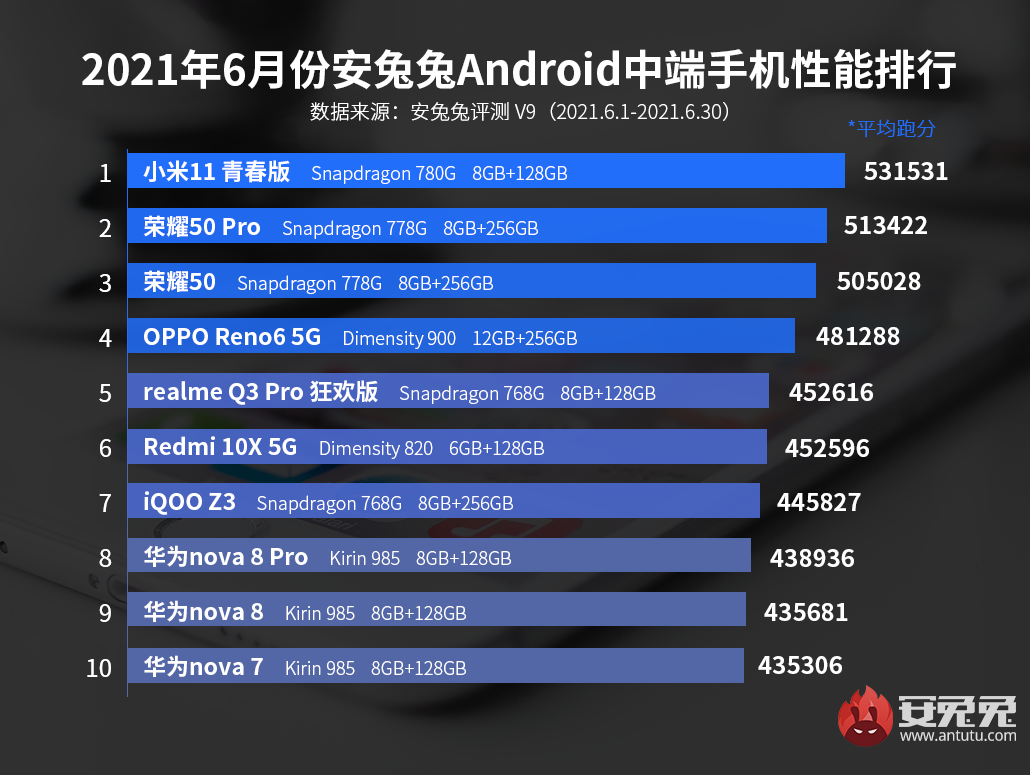 The first-ranked model is the Xiaomi Mi 11 Youth Edition, which is equipped with the Snapdragon 780G, with an average score of 531531. The Snapdragon 780G is built with a 5nm process, the architecture is upgraded to 1+3+4, and the CPU has the A78 core blessing. So it has better performance.

In addition, there are actually realme Q3 Pro and Redmi Note 10 Pro at the mid-range price. Both of them are equipped with the flagship Dimensity 1100 processor, but the price/performance list cannot be calculated by price, otherwise some old flagships can be listed, so here Models with flagship chips and mid-range prices will no longer be listed.

The second and third places are the newly released Honor 50 series, both of which are equipped with Qualcomm Snapdragon 778G, with an average score of 513422 and 505028. The Snapdragon 778G also has the A78 core blessing. The chips don’t have much of a performance gap.

In addition, the official data released by Honor shows that the average frame rate of Honor 50 Pro “Honor of Kings” 90 frames high frame rate mode is 89.84, and the average data performance is even better than that of the friend Snapdragon 888 model. Impressed, is it the credit of GPU Turbo X?

Finally, let’s talk about the fourth-place OPPO Reno6 5G, which is equipped with the Dimensity 900 processor. This is the first time it has appeared in the performance list. The average score is 481288. From the point of view of running points, the Dimensity 900 belongs to a mid-range SoC. , took over the Dimensity 820, but the specifications backstabbed its big brother. After all, it is compatible with LPDDR5 memory, but it is positioned at the mid-range, and it is difficult to use even if it is compatible.

The above is all the content of Mobile Update’s Android mobile phone performance list in June. Overall, the ranking of flagship mobile phones has not changed much. New phones have been added to the mid-range, but the performance is not particularly outstanding. There was no Dimensity 820 and Kirin 820 such existence.

Looking forward to the second half of the year, there will inevitably be more flagship mobile phones. There are many known ones, such as Xiaomi’s long-prepared MIX series, Huawei P50 series, etc., as well as a large wave of new phones equipped with Snapdragon 888 Plus. There is also the Snapdragon iterative flagship SoC codenamed SM8450, which has been revealed for a long time. It is said that a new machine will be launched this year, which is worth looking forward to.